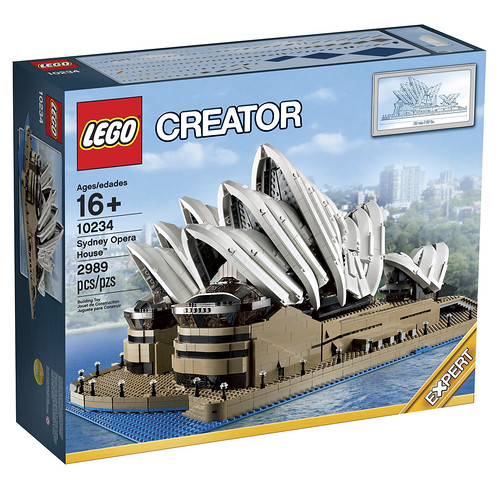 Recreate one of the 20th century’s most distinctive buildings with the Sydney Opera House model. Build the unmistakable shell roofline, waterfront forecourt and more with this authentic representation of Australia’s most iconic building. Employ a variety of new and advancedbuilding techniques to recreate the complex forms, angled walls and subtle detailing of the real thing! Collect lots of dark tan LEGO® bricks including the rare 1x1x2/3 stud and 1x2x2/3 stud slopes, as well as a 48×48 stud baseplate in blue for the very first time!

•  Build this model of a UNESCO World Heritage Site!

•  Collect the 48×48 stud baseplate, available in blue for the very first time!

•  Sturdy construction allows the model to be handled and moved!

As always, here’s the Youtube Designer video for this set.

After seeing the pictures and the designer video for the LEGO Creator/Expert/UCS version of the Sydney Opera House, now compare this with the exisiting 21012 Sydney Opera House from the Architecture line (its also currently on sale at Amazon America for 30% off at $28.06). The new one definitely looks better with more detail. But which one do you think is better when your considering the price? The larger Creator version that is about 8 times more expensive or the smaller Architecture one?