With the wide release of the first ever feature-length theatrical movie produced by the LEGO Company mere weeks away, The LEGO Group & the LEGO CEE team have graciously provided those of us who help run TnB with copies of THE LEGO® MOVIE™ sets to review. The first review was 70801 "The Melting Room". Now I present our review of 70800 "Getaway Glider".

First up is the requisite picture of the front of the box... (since these are direct from TLG they feature the European style boxes, which means no piece count) 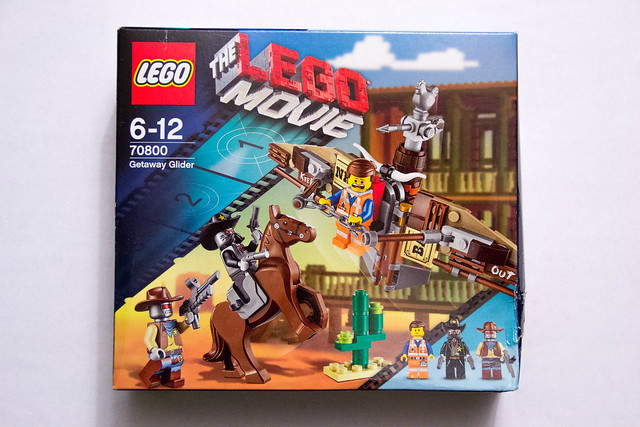 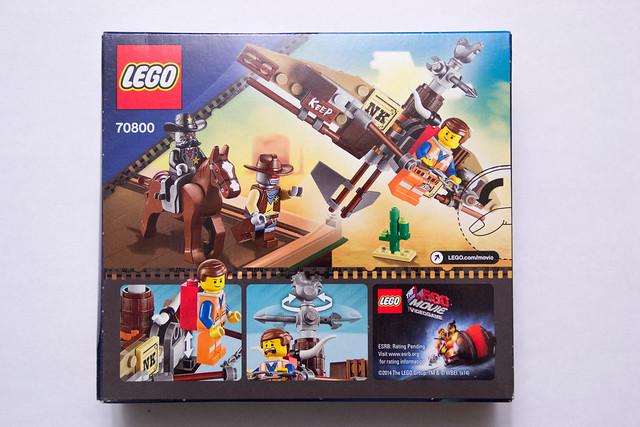 ... And the top. Note the names of the robots: Sheriff Not-a-robot and Deputron! 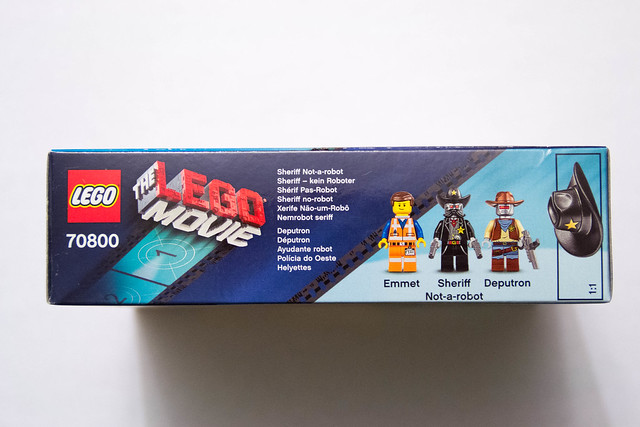 There is one instruction booklet, which features the same artwork as the front of the box. 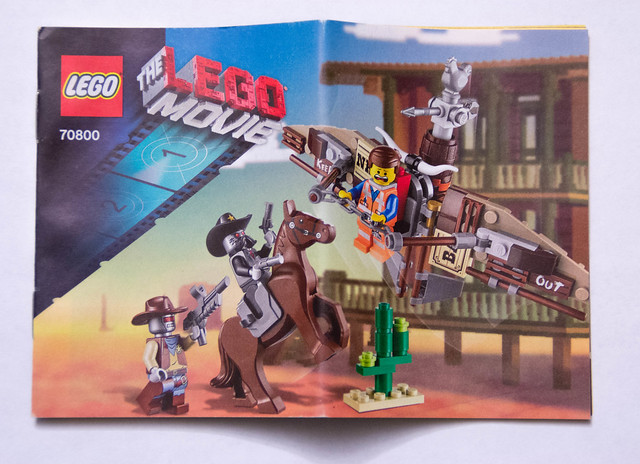 The contents of the open box includes two bags of parts, one new-style horse and a small sheet of stickers: 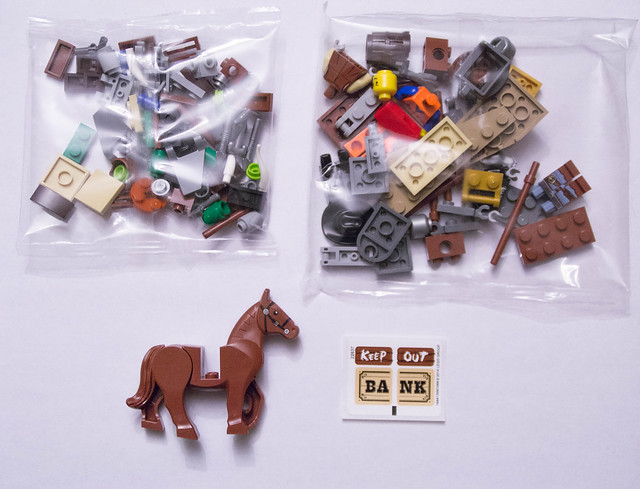 Notable and/or interesting pieces include the three minifigures, naturally, as well as Deputron's rifle. Other rare or notable parts are the five (four pictured) Dark Brown 1x2 curved slopes, the metallic chicken, the red 1x1x2 brick w/hole (a.k.a. "The Piece of Resistance"), the two cowboy hats, the "long horns" (only available in one other set presently), and the neck-loop mustache. I included the neck brackets here because the vertical portion looked longer than the standard version, but maybe not. 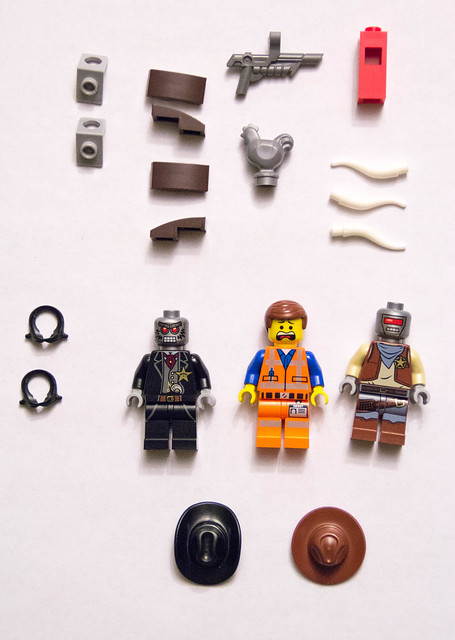 Notable extra pieces are the second mustache and the third long horn. 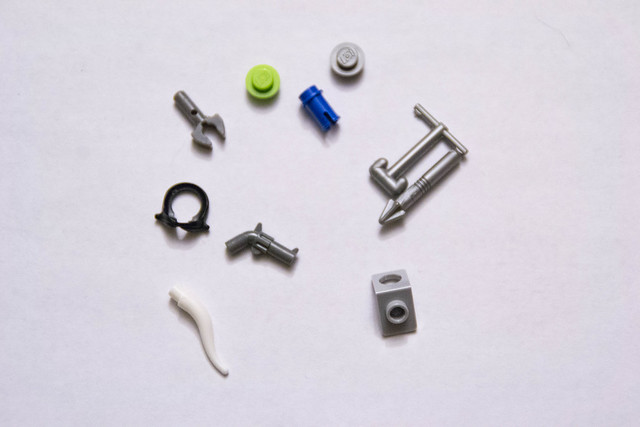 Close-up of the robot head designs: 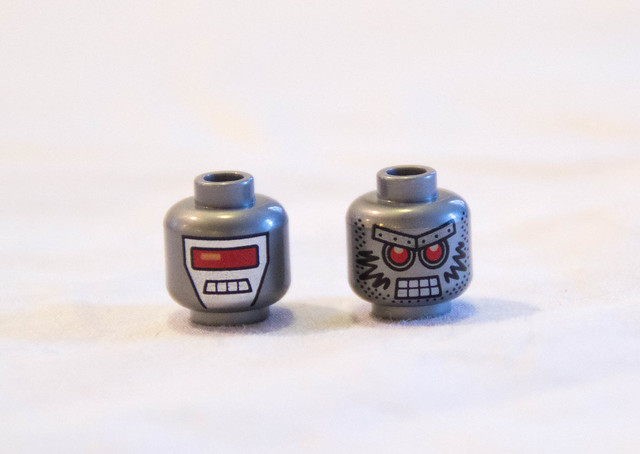 Close-up of the mustache: 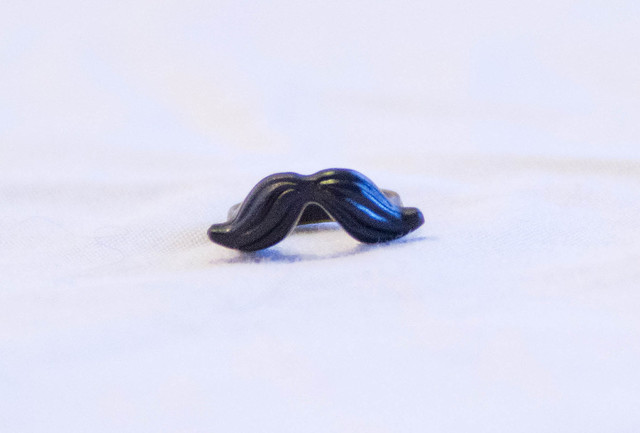 Close-up of the cowboy hats: 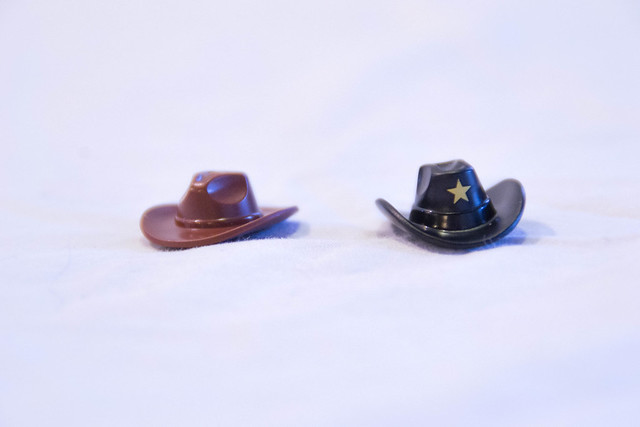 Here we have the two antagonists for the set, Deputron and Sherif Not-a-robot, along-side a handsome cactus set piece. The set would have been considered complete without its inclusion, so it's a nice touch that lends more western flavor to the set. 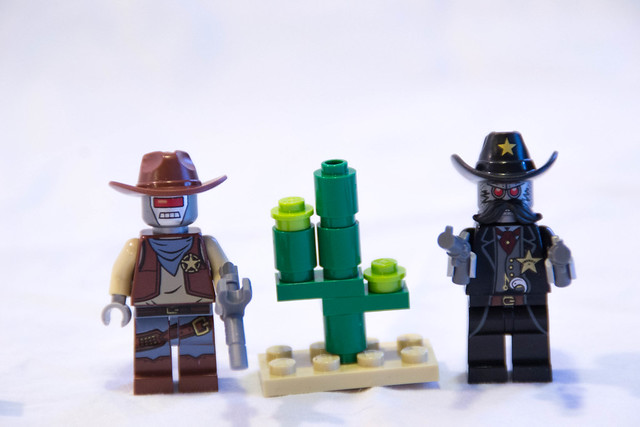 All the minifigures (and the horse) from the front: 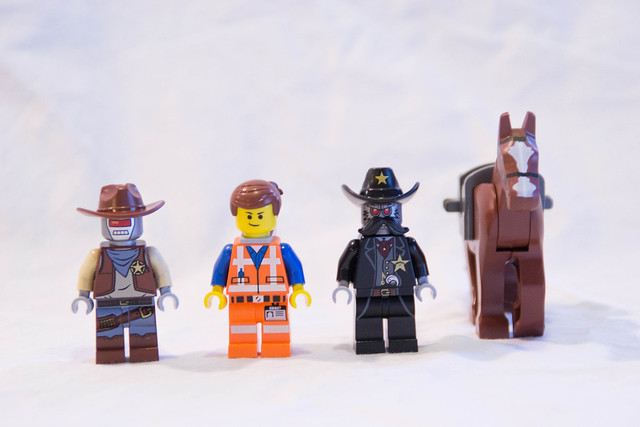 And from the side. Note how the Piece of Resistance is attached to Emmet via the neck bracket. 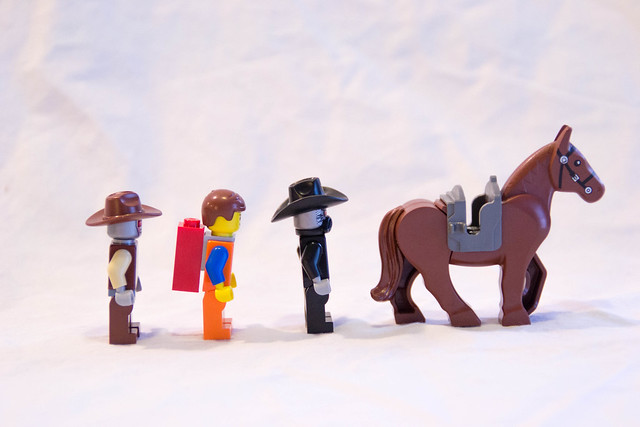 The final build of the "Glider" complete with wind vane on top, and Emmet in "panic mode". 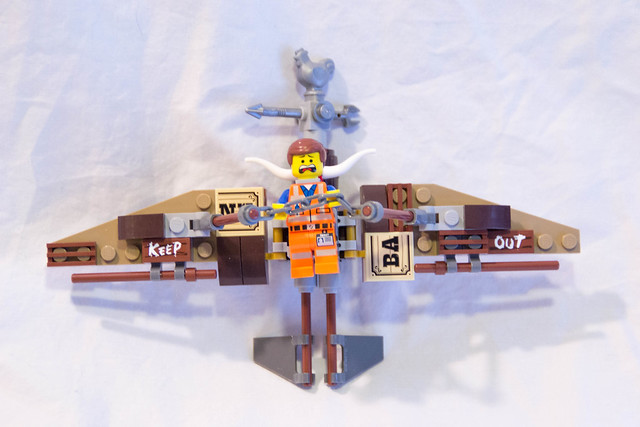 The "Glider" without a rider. 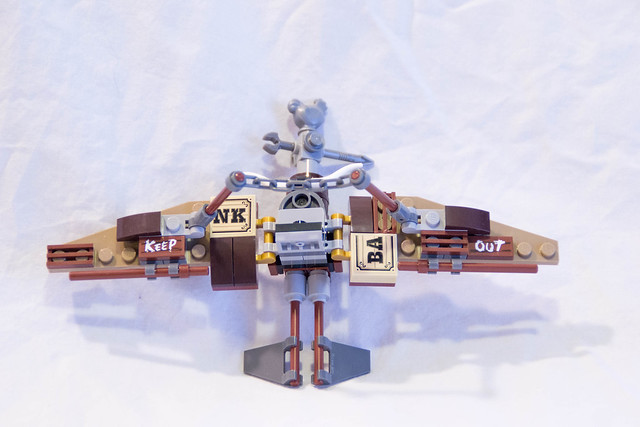 It's interesting to note that Emmet does not sit on this vehicle, but is actually attached to it via the "Piece of Resistance" on his back. It's certainly a creative way to fasten him to it, but the clutch power between the hole on the side of the 1x1x2 brick and the stud on the neck bracket is not as strong as other pieces, so Emmet can fall of relatively easy during rigorous play.

The Glider, itself, gets most of its old-world western flair from the color palette. Browns and tans with just a hint of silver and gold fairly represent the materials of the era. The minimal stickers only serve to enhance the aesthetic, representing two signs ("BANK" and "KEEP OUT") that have apparently been broken in half to form pieces of the Glider. In fact, the hodgepodge nature of the build is certainly evocative of how hastily this aircraft must have been cobbled together out of whatever was laying around.

The Emmet figure is your standard fare for the theme, from what I can tell, so the stand-outs here are Sheriff Not-a-robot and his trusty sidekick Deputron. The printed details on both their faces and bodies are well-designed, and the new mustache piece used on Sheriff Not-a-robot will, no doubt, be very popular among Western and Steampunk builders. Deputron's face is very reminiscent of Battlestar Galactica's Cylons, with the single red-hued slit for eyes and a hint at a single light that probably slides back-and-forth, whereas Sheriff Not-a-robot's head features two distinct eyes, which are none-the-less also red. Another interesting thing I noticed is, while most characters have that white "twinkle in the eye" decoration, Emmet does not, which gives him a bit of that "fool on a journey" quality.

Play factor is pretty large in this set, with three minifigures, a horse, and a crazy aircraft. However, I can imagine it would be pretty hard to hold the Glider and flap its wings back and forth (as seems to be the intention) without either knocking Emmet or some other piece off. Another issue is that there is no way to put the Glider down, other than on its back or front. There are no landing gear and no stand, which will make it problematic for display purposes. While not intrinsically playable, the cactus lends an air of authenticity to the western theme. I could see Emmet ending up crash-landing right on top of it, with hilarity ensuing, so it can easily be incorporated into play.

Design: 8/10 - Western feel is in full effect and the makeshift nature is readily apparent, but play is hampered by fragile bits and there is no way to stand it up. The cactus is elegant in its simplicity.

Build: 7/10 - There are a few smart building techniques, but for the most part it's pretty straight-forward.

Minifigures: 9/10 - Emmet is great, but Sheriff Not-a-robot and Deputron steal the show.

Playability: 7/10 - There is a lot of play packed into this small box, but beware of falling pieces!

Parts: 7/10 - There is a good collection of unique or rare pieces, but others are fairly common.

Authenticity: 10/10 - While none of us have seen the movie yet, I can't think this is anything but a spot-on translation from screen to ABS.

So? What do you think?
ALL HAIL THE BLACTRON EMPIRE!

I love how they use pieces like the chicken piece, and the tiles with stickers, because it gives you more pieces for your Western type stuff. I love the mustache piece, that is the #1 reason I would buy the set. I already have the new brown horse, but that could be cool to a lot of people who don't have it already.
Top

Nice minifigs for cowboys theme collection. Unlike Calamity Drone from CMF series, both Deputron and Sheriff won't have any colour mismatch issue after swapping with yellow/skin colour head and hands.
My First MOD
My Jabba Palace with Rancor Pit Resizing
Top

legohunter wrote:Nice minifigs for cowboys theme collection. Unlike Calamity Drone from CMF series, both Deputron and Sheriff won't have any colour mismatch issue after swapping with yellow/skin colour head and hands.

Oh man, I love the mustache! I'll have to definitely pick this one up.
Top
Post Reply
5 posts • Page 1 of 1

Users browsing this forum: No registered users and 18 guests