Variety has an article regarding the upcoming LEGO Super Heroes theme. (via Brickset) According to the article, Warner Brothers and LEGO will distribute 200 LEGO Superman Minifigures to New York Comic Con attendees which runs from October 13-16. The new LEGO Super Heroes 6860 Batcave will also be revealed during Comic Con 2011.

As a little teaser, they have an image of the LEGO Superman Minifigure as well as a picture of the 2012 LEGO Batcave 6860 set. All LEGO DC Comics sets are scheduled to be released January 2012. Please note that prices are based on our estimates only. 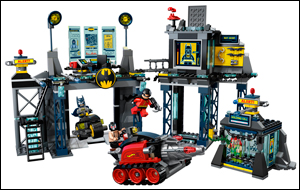