LEGO Ideas Project Creation 31 Minutos T.V. Studio by YnsomniacTypho is the latest LEGO creation to reach 10 000 Supporters. Congrats! Your project would now be headed to the LEGO Reviews stage where it would be evaluated to potentially become the next official LEGO Ideas set.

This set is about the chilean series “31 minutos”. This series features a news channel conducted by puppets. The main topic of the show are funny, crazy and amazing news around the world.

This LEGO set portrays the main studio of the news channel, which resides in the city of “titirilquen”, which population is only puppets (titirilquen literally translates to “city of puppets”). This channel has its own songs, its own heroes and villains and one of the best stories on TV. This set has the main characters from the show, some of their accesories, the meeting/dressing room seen in some episodes of the series and of course the main location of the show, the studio itself.

This LEGO set includes 535 pieces and 6 minifigures. The minifigures are the main characters in the series who are:
Tulio Triviño: the newscaster and the face of the channel
Patana: Tulio’s niece, one of the best detectives of titirilquen and a very talented reporter.
Juan Carlos Bodoque: the best reporter of the channel, creator of “the green note” with reports on the environment and how to take care of it
Juanín: producer of the show, best friend of Bodoque and Tulio and the most essential employee who always does everything.
Policarpo: In charge of entertainment news, popular culture, and music (he presents “The Ranking Top” featuring original songs from the show)
Tío Pelado: recurring villain of the series and a swindler who plays pranks on the other characters

We decided to build this set because we love “31 minutos”, we grew up watching this series and singing its songs, and we, like millions of people (especially in Latin America) want to see “31 minutos” on a LEGO set. This would be a dream come true.

This would be a good set because “31 minutos” is very popular worldwide, it was broadcast on channels like Nickelodeon, Cartoon Network (in the United States), Channel 11 (in México), in South America and even in some countries from Europe like Spain and Portugal because the idea of a funny and interactive news channel was very interesting and attractive to consumers. The fame of 31 minutes is such that the series has made several live show world tours under the name of “yo nunca ví televisión”. 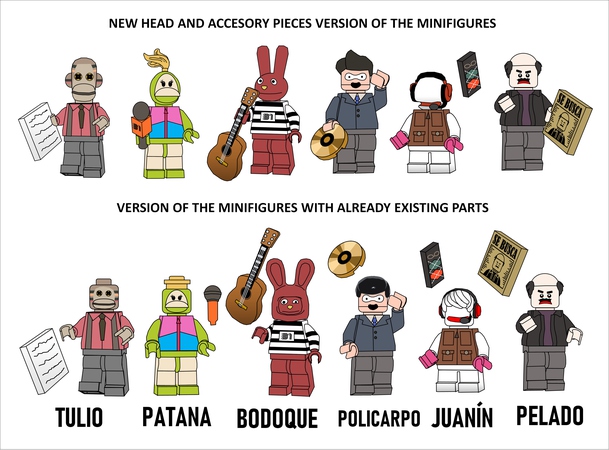 We really love this series, and we believe this is an idea that should become a LEGO set. We only need your motivation and 10,000 supporters. 31 minutes is a huge phenomenon and if LEGO decides to join it then it would be something amazing that will benefit all of us, fans of the show. Please support us and join this dream.

This set was made by me in collaboration with the user “XW2387” who developed 50% of the work and therefore must receive 50% of the benefits and recognition from this set in case it is approved.