Fall Guys: Ultimate Knockout is one of the biggest games and most popular games right now. And rightfully so – this game is so fun and so unique! This endless game of fun and frustration felt like a no-brainer to try and make into a LEGO set! This game would fit so perfectly with LEGO and could expand beyond just one set, but let’s just talk about this project!
Fall Guys has 24 courses in total and I’ve taken some of the best and iconic elements from those courses and thrown them into one GIANT customizable course. The set consists of six “Fall Guys” which is fitting since the number of players competing is 60. There’s three classic coloured ones, and of course there had to be some wacky and iconic outfits! There’s the pirate, pineapple and unicorn who were the best to put in the set since no new pieces can be used in the set.
The first part of the course has 6 spots for each of the “Fall Guys” to start on. Once the race begins they go up the ramp to the first obstacle from the course called The Whirlygig. There is a spinning function you can rotate on the side to knock them off.
And if that wasn’t hard enough to get across there’s a swinging arm that can spin around as well. When you make it across you need to jump through the giant propellers also from the Whirlygig.
This leads you to one of the most iconic and frustrating courses, the See Saw. There are two levels that can rotate up and down as you attempt to make it across towards the end.
And now to my personal favourite part of the set – Door Dash. I knew that I wanted to include this course somehow in the set and came up with a way that you could have the doors act just like they do in game. Before you start you can lock and unlock as many doors as you want using a dial on the back that you could lower and put behind a door to lock it. To unlock it, simply lift it so that it isn’t pressed up against the door. Take one of the “Fall Guys” and dash on through, knocking the doors down just like in the game!
And now that you’ve made it through be the first to cross the finish line and grab the crown from the pedestal! Getting the crown is one of the most iconic parts of the game, so I wanted to include it in some form and give the winner some sort of prize for winning at the end!
The course is fully customizable. Allowing you to put what obstacle you want in whatever order you want in between the start and end of the course. Having multiple of this set would help as well, allowing you to actually create full versions of these levels! Overall just like the game, I think this set would give people hours of endless and unique fun and experiences! 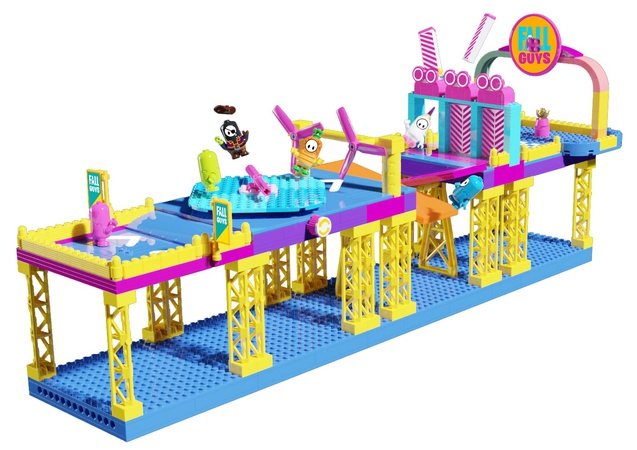