Once 10 000 supporters are reached, it would be headed to the LEGO Ideas Review stage where it would be evaluated to potentially become the next official LEGO Ideas set.

HeroQuest is a fantasy adventure game set deep within a hidden stone labyrinth. This maze of underground rooms and corridors is controlled by the Evil Sorcerer and his forces of Chaos. Cruel orks, foul undead monsters and a terrifying stone gargoyle wait in the dungeon to thwart your intrepid heroes.

What treasures or traps await you around each dimly lit corridor? Will your strength and magic be enough to overcome this challenge?

Four valiant Heroes have been summoned to do battle. Theirs is the ultimate heroic challenge – descend into the treacherous world of unknown and defeat the evil forces within…

HeroQuest was an award winning adventure board game initially released in Europe in 1989 to great acclaim. Through many design revisions and creative thinking I have managed to recreate the entire boxed game as it was originally sold – and within the 3000 part limit!

I have many fond memories of playing this game with my brothers and thought it could be a fantastic product to adapt to Lego Ideas.

What sets each successful product on the Ideas line apart is how different they are from each other in terms of theme and character. What connects them (apart from the studs of course) is the outstanding expression of quality and creativity – I hope that this proposal continues that trend of unique, creative and most importantly fun ideas!

It was a real challenge to design this proposal within the constraints of the Ideas rules and yet maintain the aesthetic and charm of the original game.

I am particularly proud of some of the furniture items, such as the alchemists table, sorcerers alter and the tomb of the fallen knight. I am also quite pleased with the final design of the Gargoyle, using an inverted Stature of Liberty crown combined with a dragon sword hilt from Ninjago. 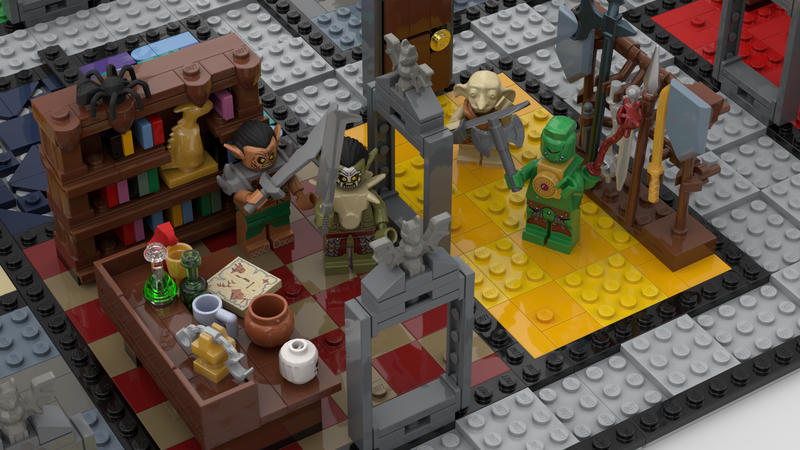