The latest LEGO Ideas Project Creation to achieve 10 000 supporters is LEGO Jumanji of 1995 by NIKANA. Congrats! Your project would now be headed to the LEGO Ideas review stage where it would be evaluated to potentially become the next LEGO Ideas set.

My project idea represents the movie Jumanji of 1995. This was one of my first movies I watched at the cinema and is one of my absolute favourites.
The Lego Idea takes place on three levels:
I was not willing to represent a simple building with its minifigures but I would like that those who started building had the chance to relive the whole film brick by brick.
I have the possibility to create Alan’s house and then add the water and the crocodile,  then the plant that comes out of the fireplace and the vegetation that invades the rooms, and finally open the whole house as the final scene of the movie.
A game within a game.
The soul of this project is in the details and there are several details to be found if you look closely. There are seven minifigures and each of the figures has its own distinguishable features.
1- Alan just returned from the Jungle with his knife;
2- Alan without the beard and ready to play again;
3- Sarah with her scared look and her bat;
4- Judy with her poisoned flower;
5- Peter with his transformation into a monkey after cheating;
6- Van Pelt, the hunter, with his rifle and his dirty uniform;
7- Carl said “boiling lace”, the policeman, with the unlucky car and the spiteful monkey with the rifle 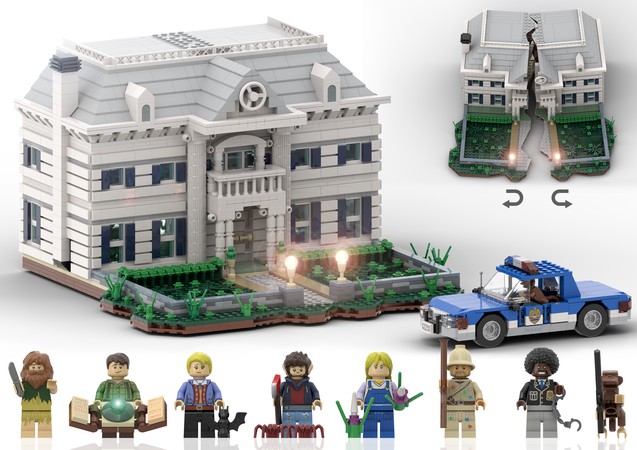