The health inspectors came to see us at the beginning of July, and it seems that they found rat hair all over the kitchen. For hygienic reasons, we were forced to close the doors of the establishment. We worked very hard on the hygiene of the restaurant these following days and managed to put everything back in place while keeping the secret of our excellence in cooking. We are happy to announce the reopening of the establishment!

« Ratatouille » will always be part of my heart. The results of the previous Lego Ideas review literally broke my heart; not the heart of a creator on the verge of seeing his project transformed into an official set, but the heart of an unconditional fan of this visual masterpiece. « Ratatouille » deserves its place within the Lego company, I am convinced of it, and I couldn’t imagine stopping this fabulous adventure like that. Like a taste of unfinished business, I was inclined to re-edit this project so as not to regret it. To close this half-opened book for good … that was my ambition.
Re-building a project is always something challenging. Because you need to think about every piece you will use. You can’t just resubmit the project and expect it to pass. The first version was refused for certain reasons, and I had to think about what these obstacles might be.
The first thing that came to my mind was the number of pieces. My first version being around 3000 bricks, I’ve decided to reduce everything for this second project. It was a big challenge for me to reduce the number of bricks while keeping the details that allow the viewer to immerse themselves in this Parisian universe. I spent a lot of hours on building and disassembling everything again, to get the perfect shape and the best use of the piece as possible.
The second thing that came to my mind was the incomplete representation of the restaurant. Indeed there was missing an essential part of this build: it’s the dining room. Indeed, even if I had been able to represent a little table in the angle of the build, I didn’t give it much credit to it. The kitchen is iconic, I know that, but I think I could dispense with certain parts to make more rooms for the dining room. So I decided to split the model into 50/50 to make the model compact and playable.
I’m very proud of the final result. I managed to keep every essential detail from the kitchen while adding an honest dining area.
Paris always fascinated me. Mixing it with french cooking makes the perfect combo for a good project. Made out of 2112 bricks containing four characters of the movie, I can say that I spent wonderful hours assembling this second version. Living next to Paris, I went there several times during the building process to better understand the shapes of the Haussmannian buildings and to feel that magical street atmosphere. I hope I managed to get you into imagination with this project. It’s always very challenging to rebuild an existing lego project, and I tried my best to honorer the first one.
This project is published on lego Ideas. Lego Ideas is the official website made by the Lego group where fans can submit a project to a vote, if this one reaches 10 000 supporters, it will be considered by the Lego company to see if this can be made into an official set. So If you like the project, I would be very grateful if you can hit the blue support button. Every support count so please, share it with your friends and family.

Now comes the time to conclude.

This project is my last proposal regarding « Ratatouille ». If this one does not pass, I believe that I will have to dare to turn the page. Whatever happens to this second version, Ratatouille remains and will remain forever anchored in my heart. I have to say that I spent wonderful hours building these two versions of Ratatouille and I think this is the most important thing. In any case, I would have tried everything to legitimize the place of « Linguini and Rémy » in the Lego universe.

I would like to thank you all for your support during the first realization. Thanks to you I was able for the first to realize my dream of 10k. I will be grateful to you forever. Maybe we can try it again?

“Believe in magic and all will be fine.
Fantasy is the keyword, everything else is pure fiction.” 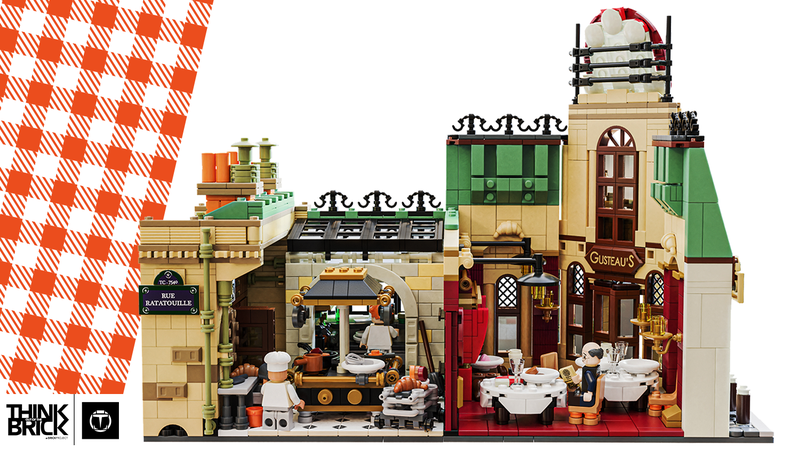