Red Dwarf Starbug LEGO Ideas Creation Project Description
Our idea for a new LEGO set is once again based on the popular sci-fi comedy TV series Red Dwarf.
Following the success of our previous Red Dwarf LEGO idea (achieving 10,000 supporters) and following much demand from fans, we’ve finally decided to build everyone’s favourite spacecraft – STARBUG! We’re giving Red Dwarf a second chance at becoming an official LEGO set, and this time the approach is vastly different!
With continuity being a running joke on the show, we have once again used this to our advantage to create a truly unique set which features the best aspects from across the seasons. This includes the Starbug interior from seasons V and VI, Talkie Toaster from seasons IV and XII, the Holly Hop Drive from season II, the Blue Alert Bulb from season VI, one of the ship’s mischievous robot Skutters, and the female incarnation of the ship’s senile computer system Holly.
Our set also features Dave Lister – the last human being alive, Arnold Rimmer – a hologram of his dead bunkmate, CAT  – a creature that evolved from Lister’s pet cat Frankenstein, an android named Kryten, and, making her first appearance, Lister’s love interest and navigation officer Kochanski.
As an added incentive, our set features possibly the greatest Red Dwarf character of all time: the evil Penguin hand puppet Mr Flibble! This little guy features in the season V episode ‘Quarantine’ in which Rimmer contracts a holo-virus, hence Rimmer’s gingham dress attire!
It doesn’t matter if you’re a child or an adult, a Red Dwarf fan, or simply a fan of awesome LEGO designs, there’s something here for everyone to enjoy! 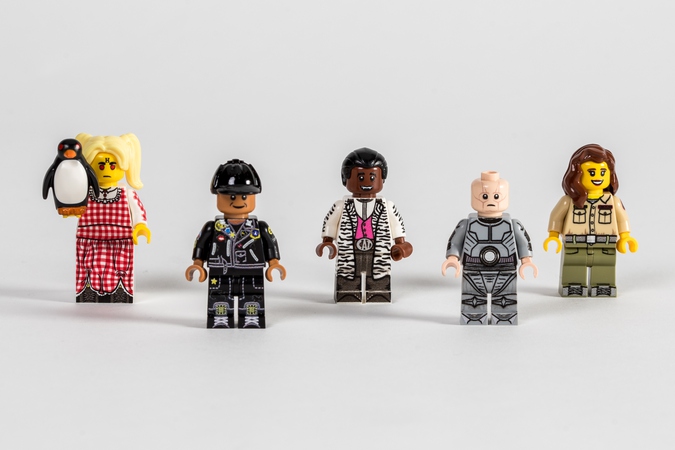