The latest LEGO Ideas Project Creation to achieve 10 000 supporters is LEGO Ideas Seagull Bay Lighthouse Imperial Fortress by Delusion Brick. Congrats! Your project would now be headed to the LEGO Ideas Review stage where it would be evaluated to potentially become the next official LEGO Ideas set.

Greetings to all the Lego Pirate fans out there, and not only. Great news!! we have built a new fortress with a lighthouse for the navy fleet, called the “seagull bay”.
From the first moment I saw barracuda bay, my childhood memories were awakened again. since I have always been a huge fan of the imperial soldiers set. I have had this idea for at least two years and I have always wanted to design this set inspired by the  famous lego series of 1989 .I have in my collection this lego series dated from 1989, 90, 91 until this day to reminisce me all the  imaginary journeys I made as a kid, so I’ve decided to design something new as a tribute to the imperial soldier set.
The basic idea behind this concept is a bay that has a 4 level fortress built on it  Starting from the lower level there is a wooden pier with a large crane for boats, which connects with the fortress through a bridge .There is also a gate with a unique decoration behind of which a beautiful banana tree is located. There is also a well that opens with coins inside and the water ends up  into the sea
Right next to it there is a food and gold  warehouse (it opens and functions as a drawer).
When walking up the stairs the main building divides. on three levels (that open), where the bottom level houses the dungeons. There are two dungeons one large and one small and in the small  one a pirate has dug with a spoon to find an escape route so that another spy pirate can pick him up with a boat.
On the 1st floor lie the headquarters where there is a dining table with curtains and a small table with treasure maps and a  compass as well as a chandelier that is made from a ship’s steering wheel and finally a beautiful balcony.
On the 2nd floor there is a cannon and a small warehouse, used for swords storage purposes.
On the opposite side we cross a stone bridge below which are all the punished pirates and we eventually reach the lighthouse where its first floor has all the wine depots and on top floors are the weaponry warehouses finally there is a crane used for small boat goods! 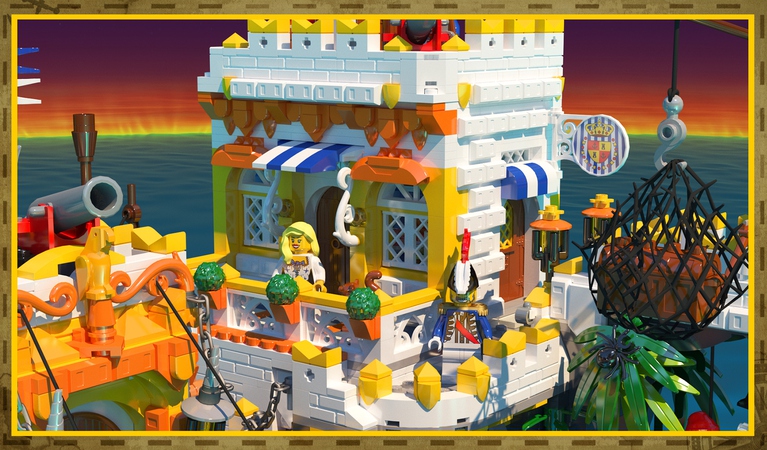