“Through the fathomless deeps of space swims the star turtle Great A’Tuin, bearing on its back the four giant elephants who carry on their shoulders the mass of the Discworld.
Exactly why this should be may never be known. Possibly the Creator of the universe got bored with all the usual business of axial inclination, albedos and rotational velocities, and decided to have a bit of fun for once.” – Terry Pratchett

Terry Pratchett’s discworld series has sold over 80 million books and was transalted into 37 languages. Nothing sums up the creative weirdness and uniqueness of the book series better than the very place the novels are set on: The DISCWORLD.
Just as Pratchett’s style and comedic appraoch is very weirdly unique the discworld itself has no equal in literature or film. A giant flat earth carried by four giant elephants standing on an even bigger flying turtle swimming through space!

Since the discworld series is loved all over the world, an actual real life display version of the star turtle Great A’Tuin and the disc would surely make a lot of nerds very very happy! And even for people who are not familiar with the books the build would still be an impressive sight and a great Lego build!

The turtle itself is partially hollow but contains enough pillars to make it a strong foundation for the elephants and the disc. The elephants are not hollow but completly filled with bricks to make them as rigid and stable as possible, while the disc itself has a frame and core consisting of long plates and technique bricks to make it very robust whilst also staying very light to not put too much pressure on the structures below.

The disc itself is scaled to fit the proportions of the elefants and the turtle. The layout of the continent is based on the actual maps of the discworld including all 4 main contents of the world: The “Unamed continent, the “Continent of Klatch”, the “Counterweight Continent” and the continent “XXXX”! Despite the real map proportions i could not resist the temptation to also include the city of Ankh-Morpork, even though it is now technically slighly to big for the build!

The build consists of roughly 2650 pieces. 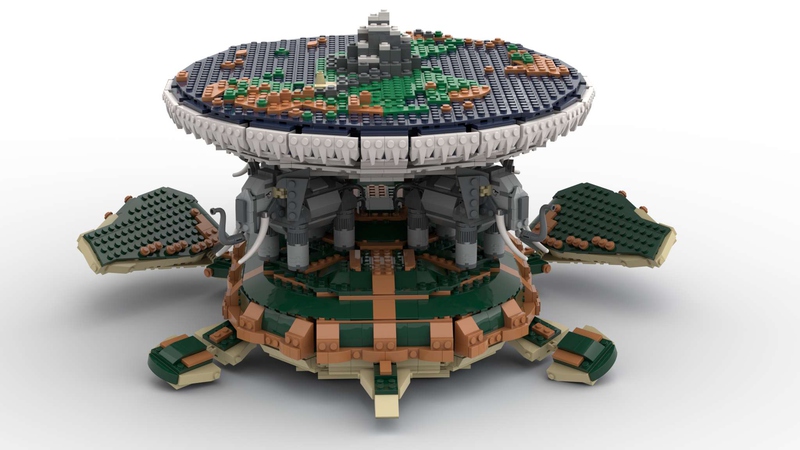 Is this available to order yet? Would love to buy the directions/parts list. :-)