So,… the pirates came back with the Pirate bay that turned in to Barracuda bay. Awesome set !!
And someone that also have returned is the Imperial Army. They decided to abandon the old Eldorado Fortress and build a new fortress instead.  The …… Fortress  The gouvenor is angry… they can’t decide what to name the fort. Whenever they are talking discussing the name of the fortress, the pirates are up to something, making trouble and trying to steal something.

Now Captain Redbeard is captured. That will might give some peace in the Caribbean…. Or will it?…

Will is a grown- up pirate now and is trying to rescue his mentor, Captain Redbeard. The imperial soldiers are doing their thing, as usual; nothing I guess.
And the never ending adventure continue in the Caribbean Ssea…

The background for this fortress is my childhood love  for the LEGO Pirates Series.After I was one of two to build a huge pirate display at Skærbæk Fan Weekend 2019, I felt it was time to take on my Lego Ideas project again.  I could feel the love for the pirate theme from the LEGO community for real when I met people in Skærbæk. Also online on facebook I could feel the hunger for more sets/mocs/builds/dioramas from the Caribbean Sea.  So I went home and started on the project again. So I’m pretty sure that it will make a great set after I’v recived  so much positive feedback.

Its “handcrafted” with no digital help. So I’m building and trying something,. Then looking at it for some days. and then making some corrections.  Also in the last minute I made a correction.

Just before I was going to the photographer, I had the honour to meet Niels Milan Pedersen,. One of the founding fathers of the pirates-series. This gave me the opportunity to hear all the stories from the past. So cool. Therefore, on the fortress I paid  a little tribute to him… Go find it. ☺

Building time :  How long time will it take to sail arround a carribean island 3 times. … Yeah.. That’s the time it took…. I guess.. 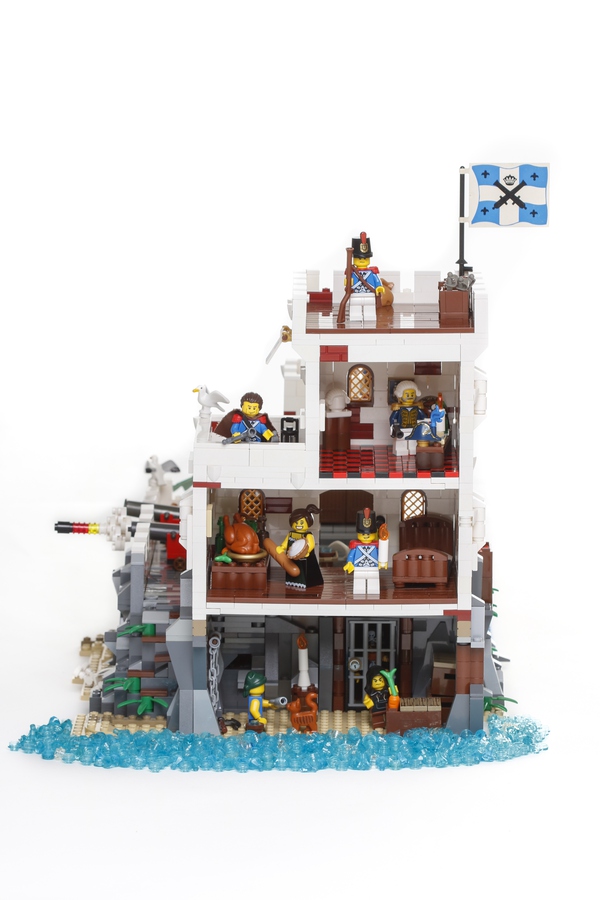