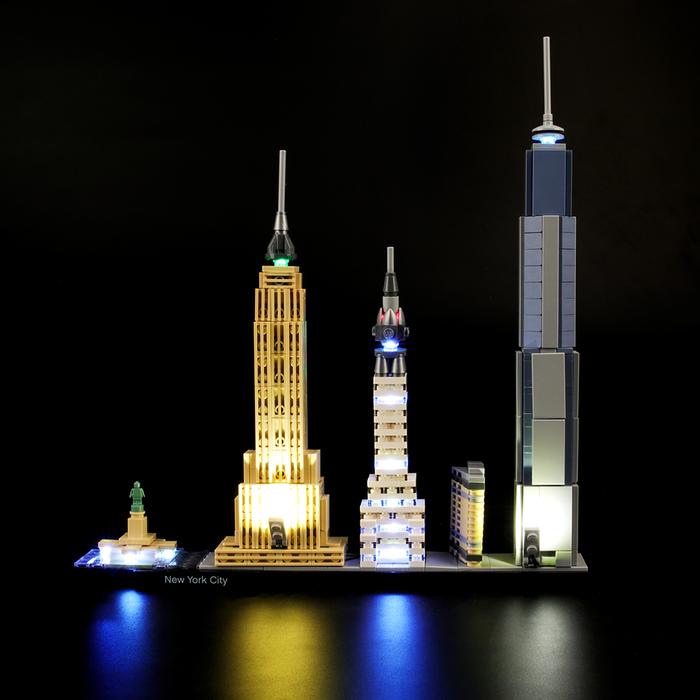 Bring magical shine to your New York City. This lighting kit is designed especially for the Lego® Architecture Series New York City 21028. This highly detailed Lego® model is a spectacle in itself, but when paired with Lightailing lighting kit, the charming model comes alive, not only during the day but also at night.

Celebrate the architectural diversity of New York City with this realistic Lightailing light kit.The Light is purely handmade. We have added 1 USB custom-made Lighting Kits for New York City and hope you’ll love our design. We have been using warm lights and white light to decorate the Flatiron Building, Chrysler Building™, Empire State Building, One World Trade Center and the Statue of Liberty ,and as well colorful flashing light for building roof. Plug in power, and light up your building blocks with our amazing design!

This is the front of the box. It highlights what is included in the box including a LED Lighting Kit, Battery box and Installation Guide. 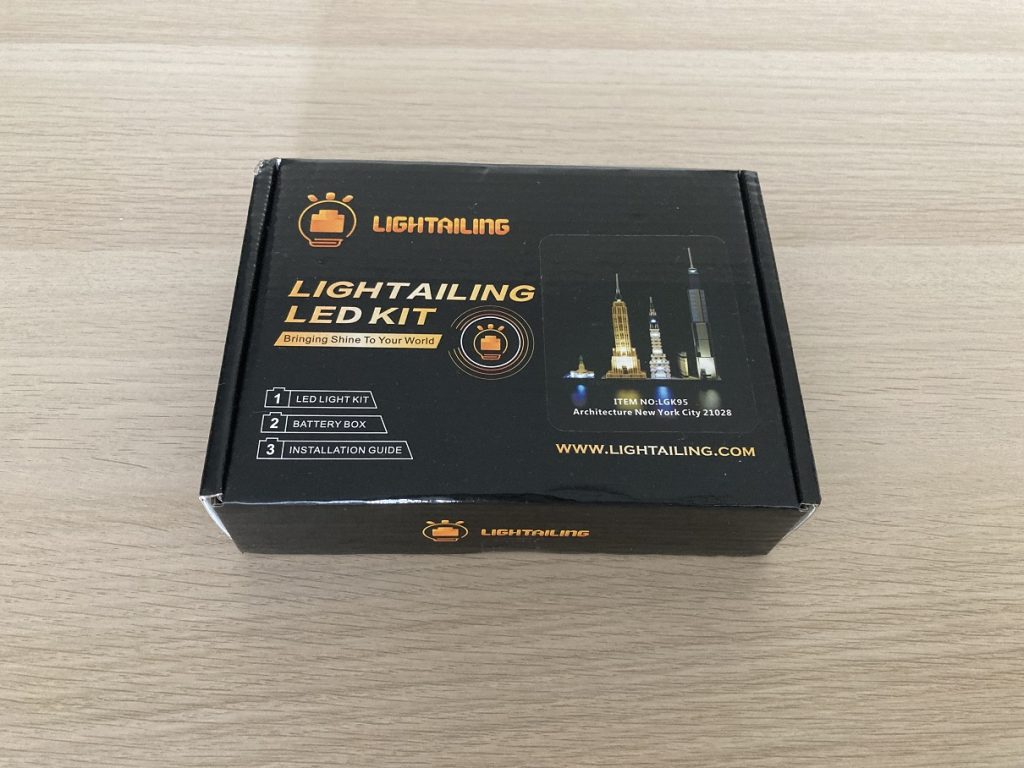 This is the back of the box. 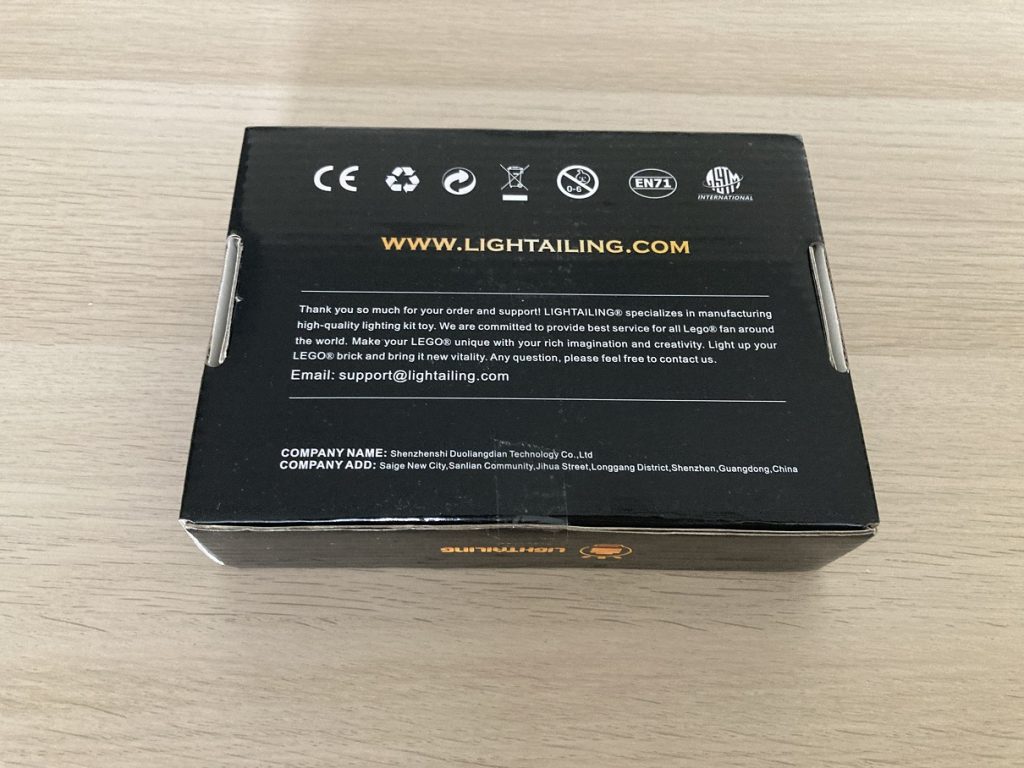 Opening the box, you will find two nicely packaged items. 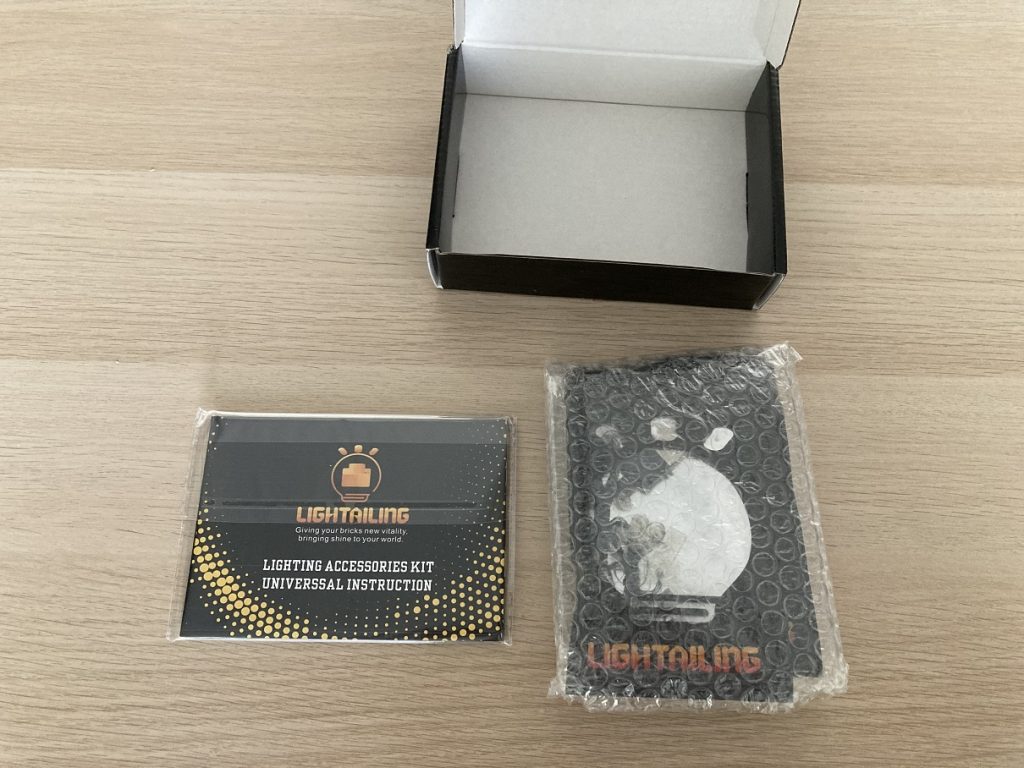 When you take out those items, you find a lighting accessories kit universal Instructions, a installation guide for the lighting kit for Architecture New York City, a service card and the lighting kit components packaged in three separate bags. 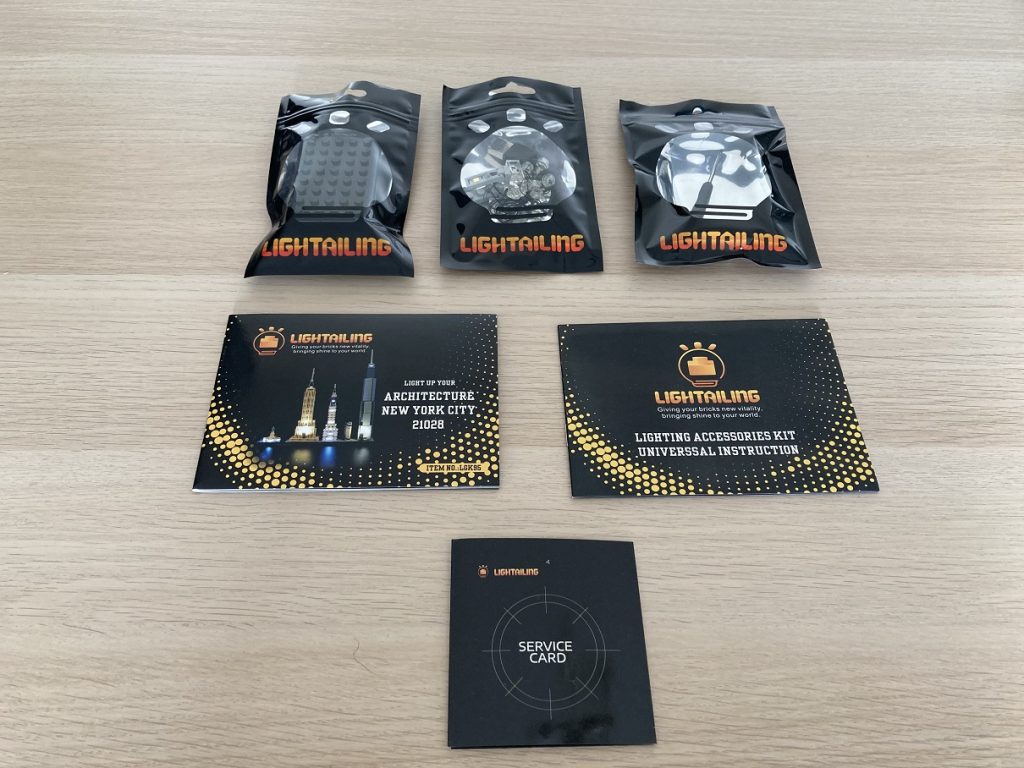 The lighting kit components include a battery box, a mini screwdriver and LED lights. 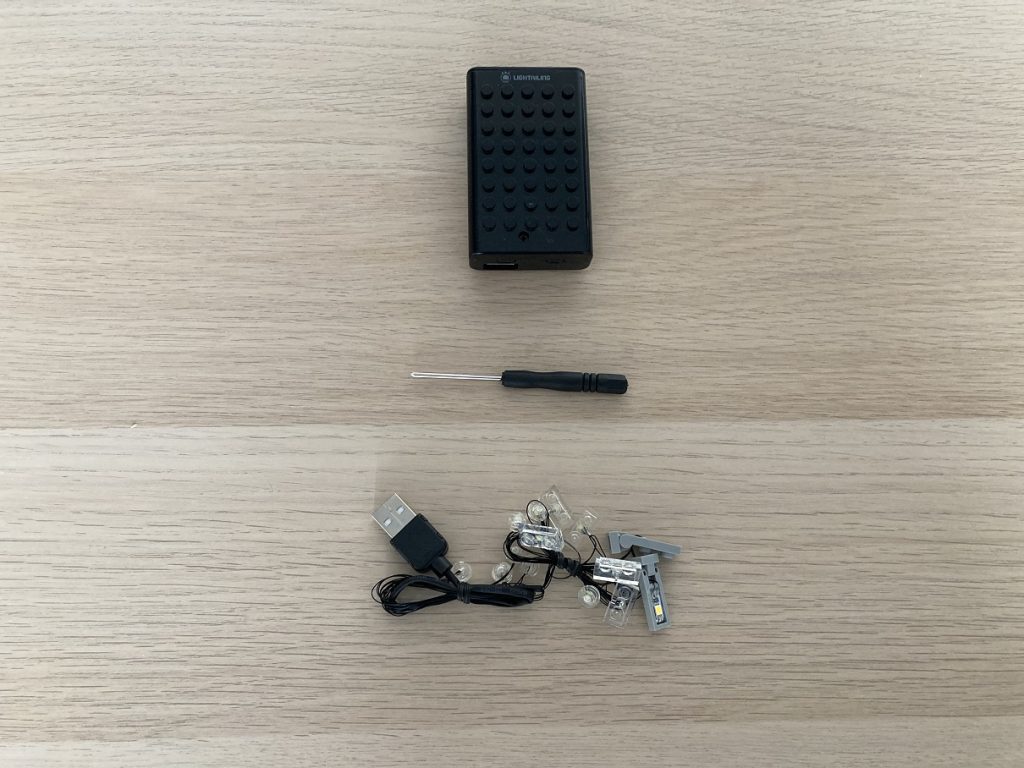 Here is the battery box after being connected with the LED lights. You use the mini screwdriver to open the screw so that you can put batteries in the battery box. Note that for this lighting kit, you will need three AA batteries. Batteries are not included in the product. 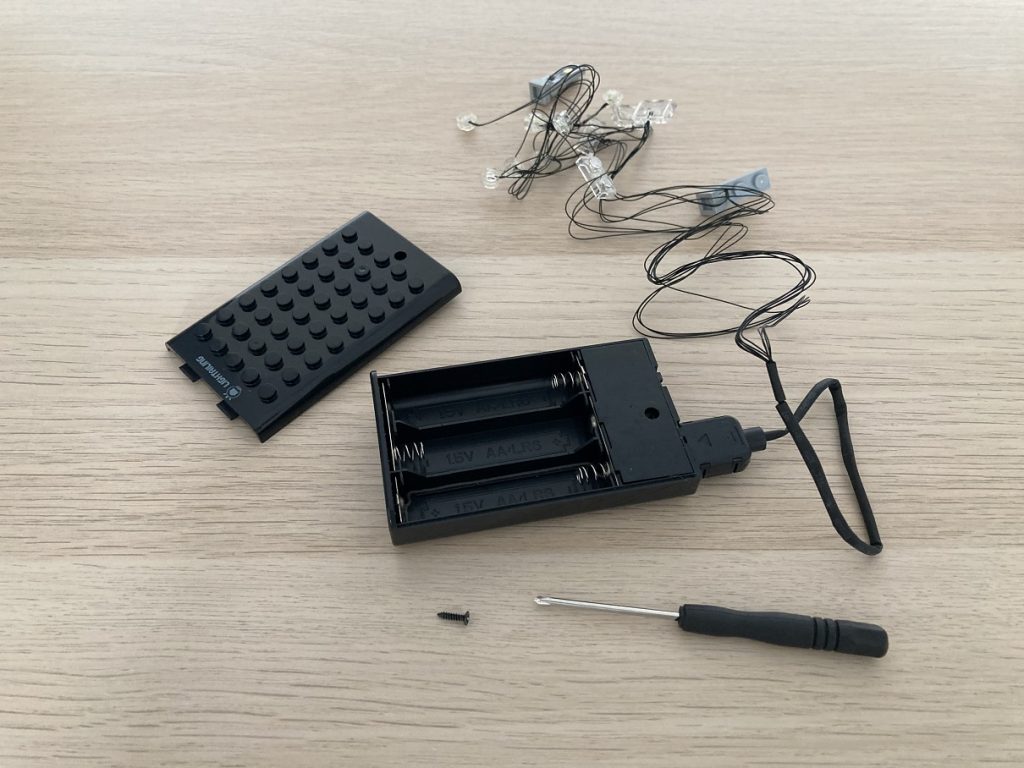 This is the back of the battery box. There is a switch where you can turn the lights on or off. 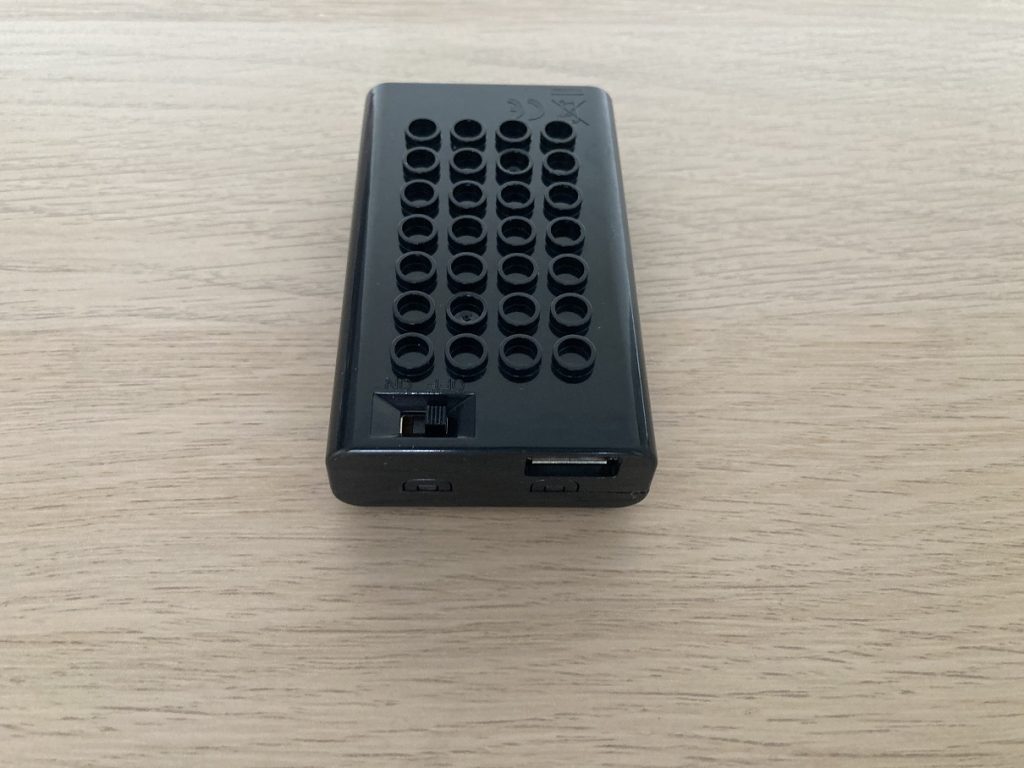 Here is the first page of the instructions/installation page. The first thing it tells you is that you should be very careful and gently with LED lights. Don’t pull on them as they can break easily. Take note of this as they are very fragile. The LED light wires are very thin.

The step by step instructions also tells you what pieces you need to remove so that you can add the LED lights. The LED lights installation is meant for an already built LEGO Architecture 21028 New York City Skyline set. 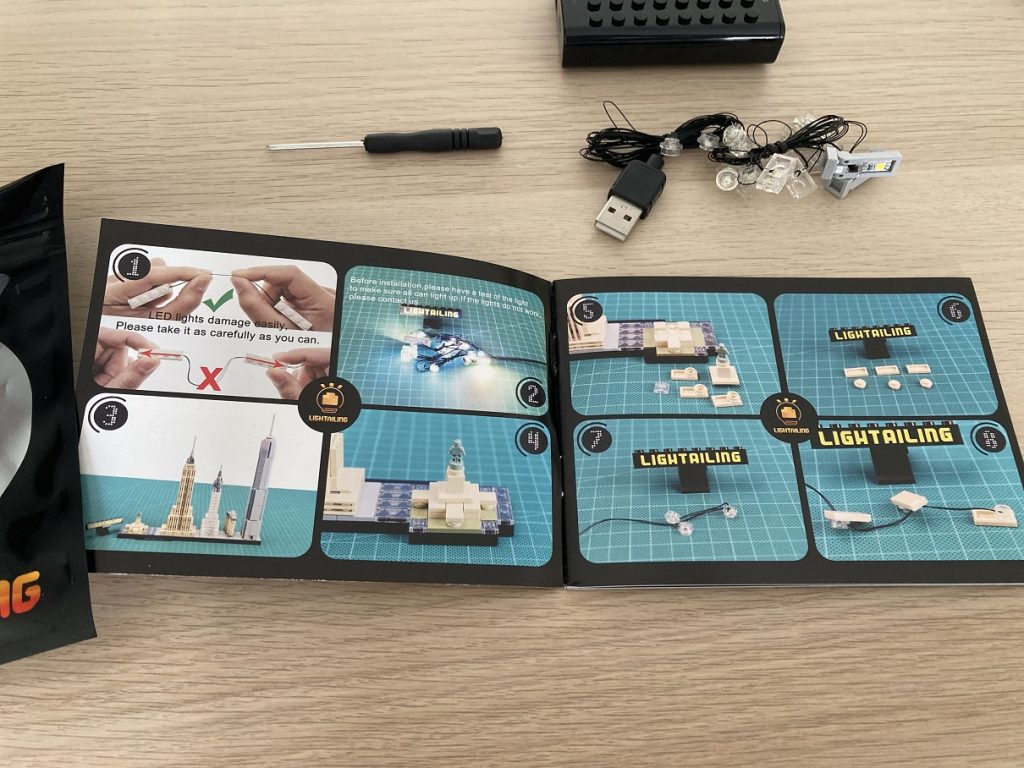 The second step of the instructions tells you to check the LED lights to make sure they are functioning properly. You should do this before installing them. We turned on the battery box and all the lights work. They look very nice and bright. 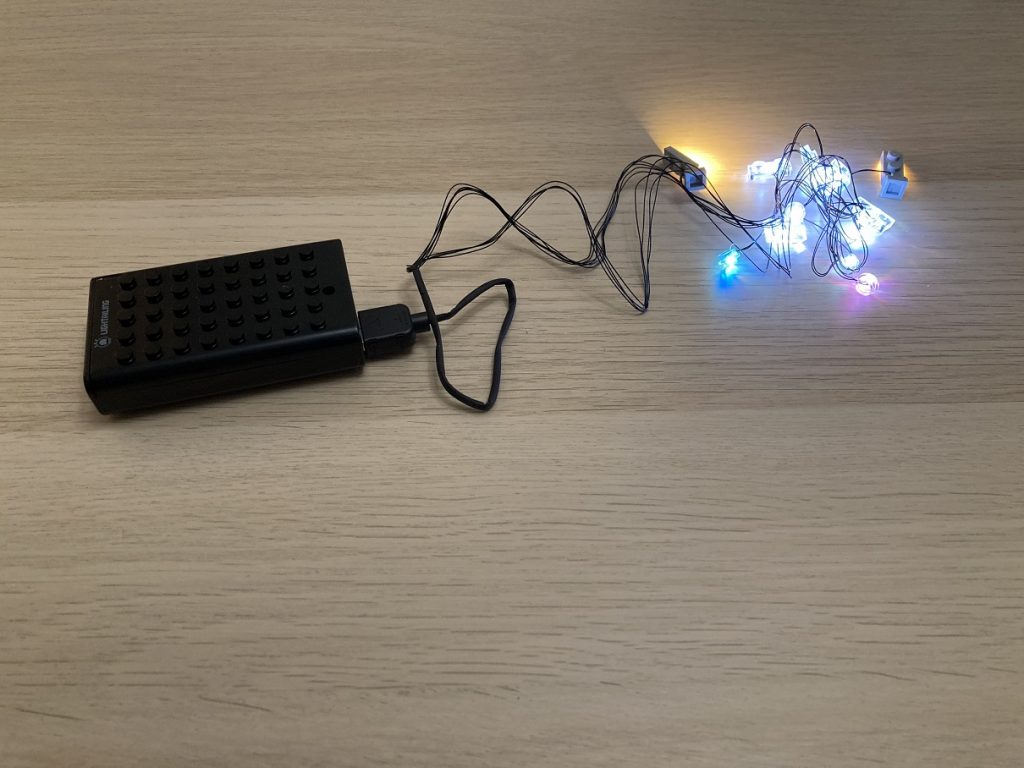 One other thing that we recommend doing is that you should untangle all the LED lights. It makes installation a lot easier. 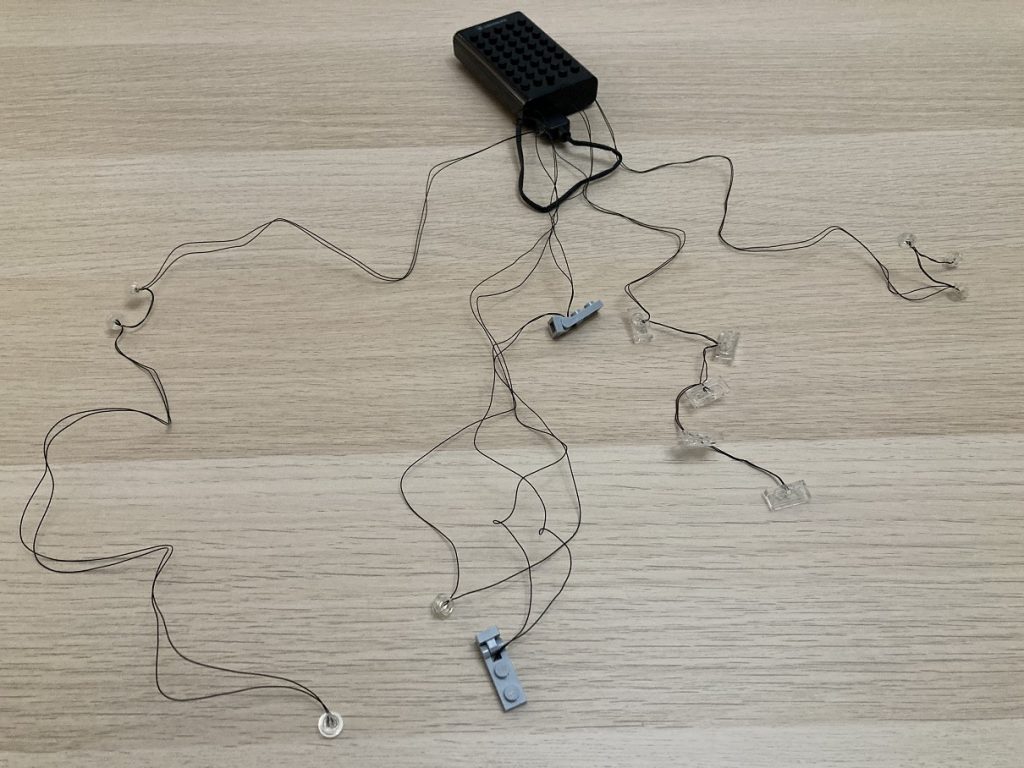 You start of the installation of the LED lights from the landmarks/buildings on the left (Statue of Liberty) to the landmarks/buildings on the right (One World Trade Center). The installation for some of them were quite straightforward and easy. However, some parts of it require more care and skill. The Chrysler Building took me a while to install as I made some mistakes earlier before finally figuring it out. Below is an image of the front of the LEGO set after the LED lights have been installed. 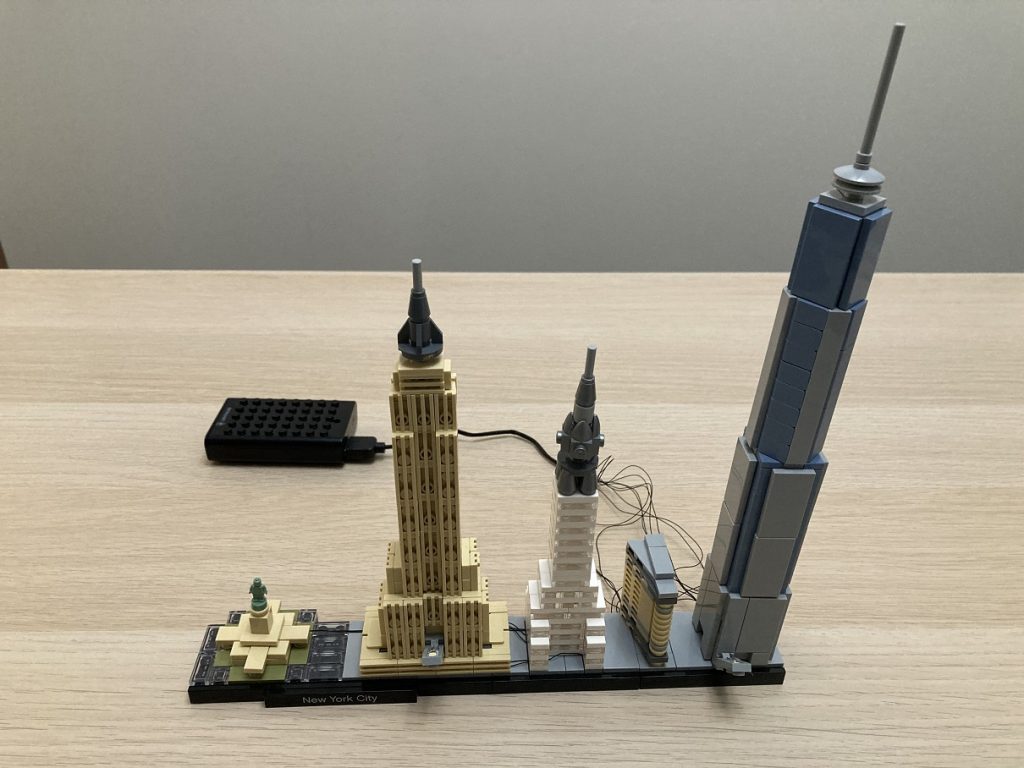 There are several components in the installation guide where it tells you how to hide the LED wires by putting them underneath the LEGO pieces. Be careful when you are doing this. Do not pull too hard on the wires and be gentle. A kid probably should not install this lighting kit as it does really you to be very careful. An adult would probably be more suitable in installing it. Below is an image of the back of the LEGO set after the LED lights have been installed.

Here are the pieces that were removed so that LED lights could be added onto the LEGO set. 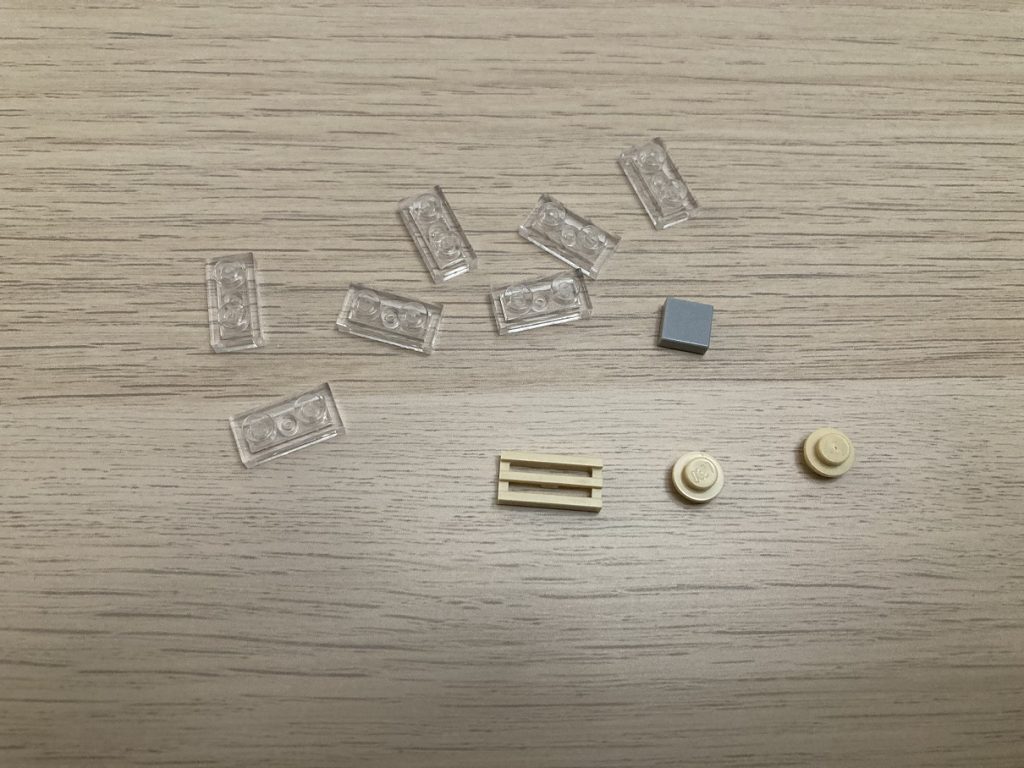 Here is the set with the LED lights on. Note that the Statue of Liberty lights and the bottom half of the Chrysler building does not light up. We probably were not careful enough when we were installing it so the LED lights broke. )’: 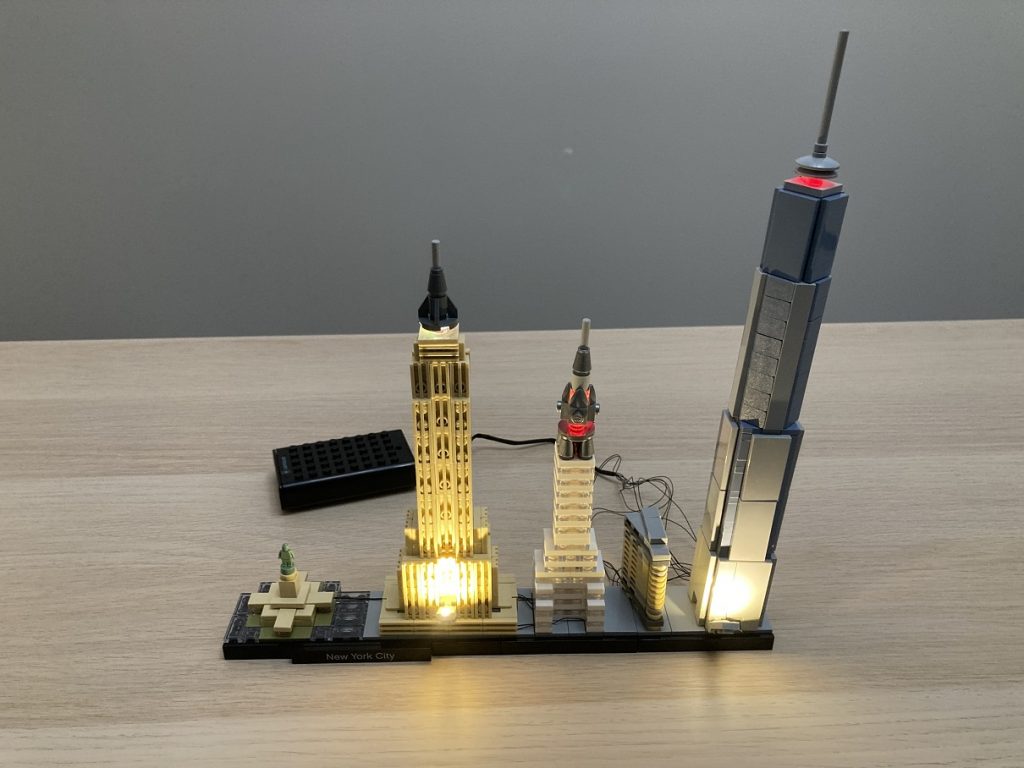 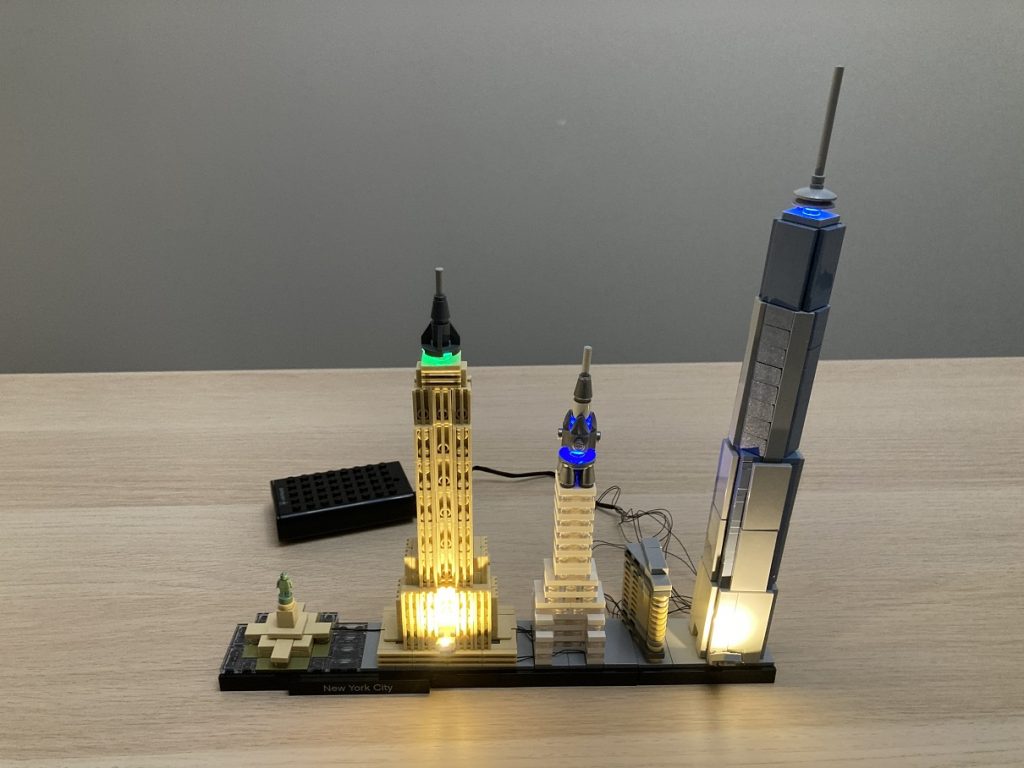 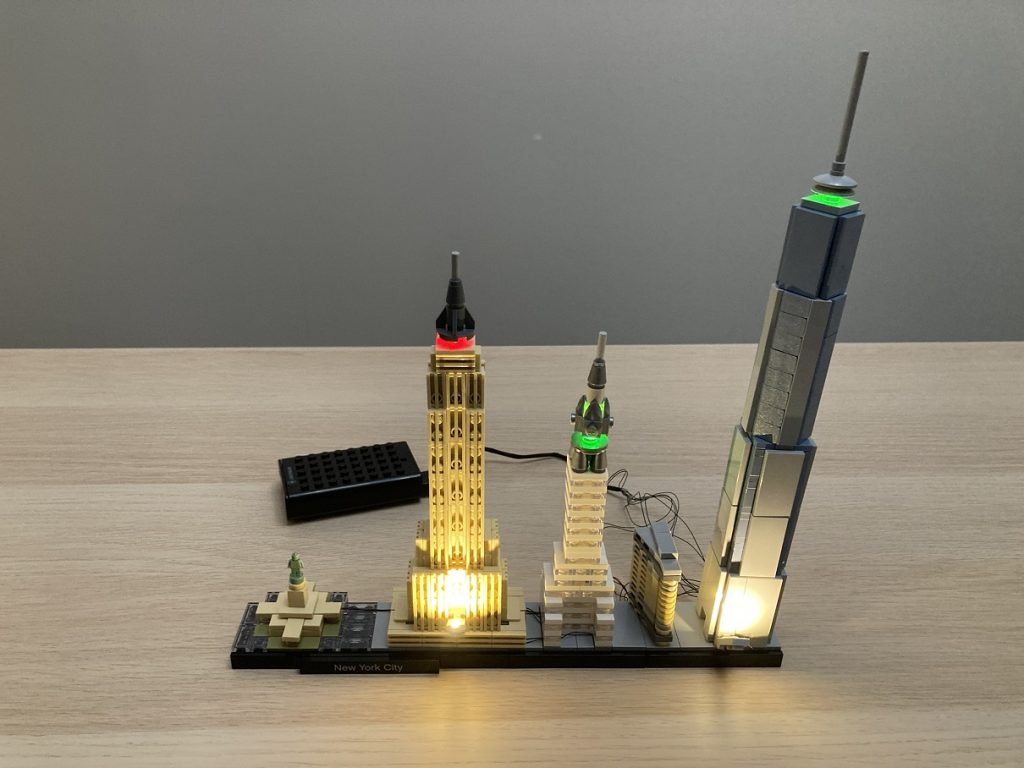 Here is another image of the set with the LED lights on. 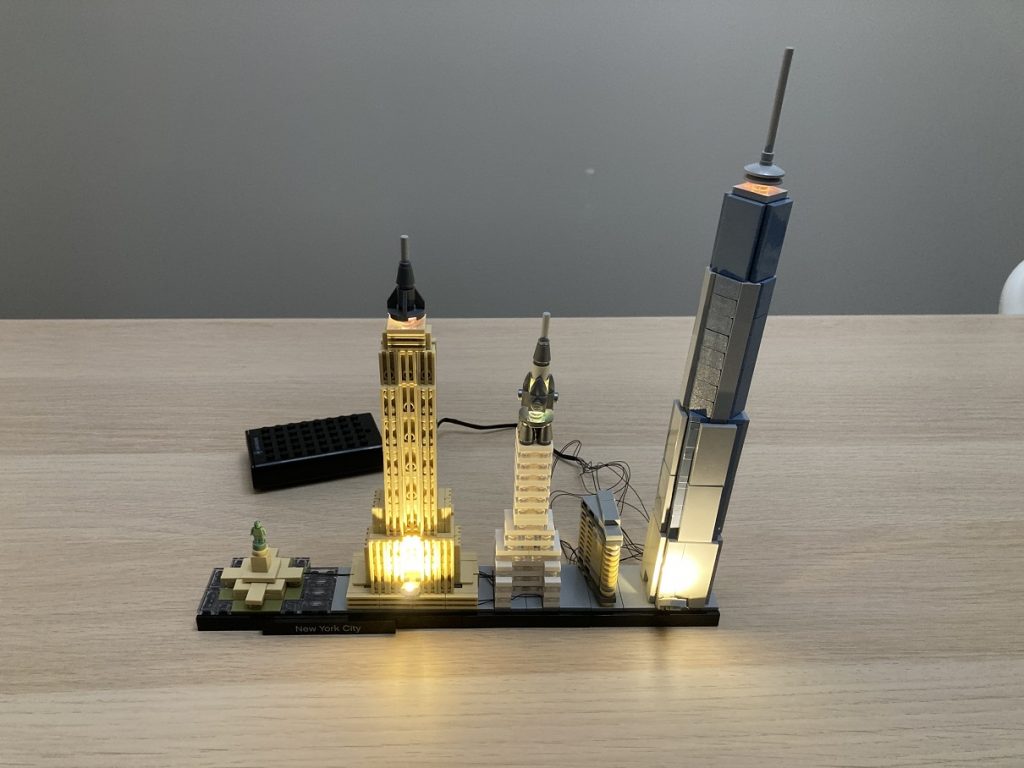 We dimmed the room lights a bit so that you can see what LED lighting kit looks like. 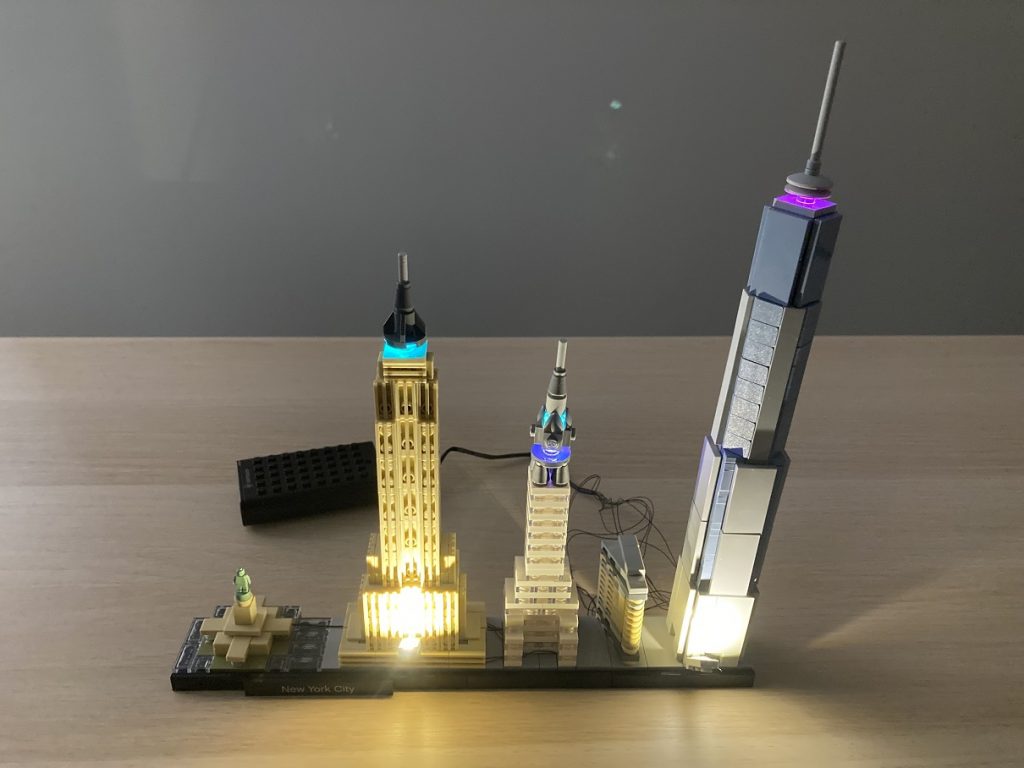 Below is an image of the LED lights on with the room in complete darkness. 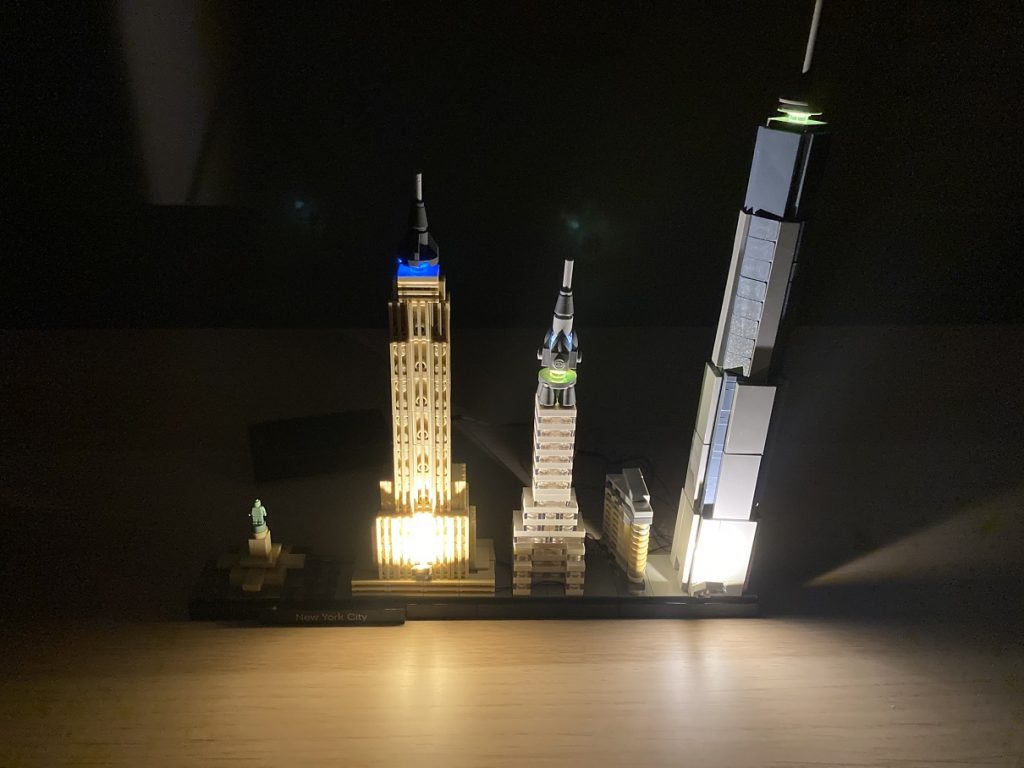 As mentioned earlier, the Lightailing LED Lighting Kit for LEGO Architecture 21028 New York City really brings the original official LEGO toy set to another level. The LED lights (especially the changing bright colors) turn it into a set with a lot more life in it. Its a nice product in that sense. In addition, the packaging is top notch and is packaged really nicely.

Unfortunately, the LED lights and wires are probably a little too fragile. After installation, several of the LED lights no longer function anymore (Statue of Liberty and bottom half of Chrysler building). You really have to be careful with installing this. Do not pull on the wires. We tried to organize the wires a bit more by hiding it within the set and may have pulled a bit on some of them. This made the lights no longer work anymore. It would have looked really nice if all the LED lights worked. )’:

With that said, the set still looks really nice with most of the LED lights functioning. 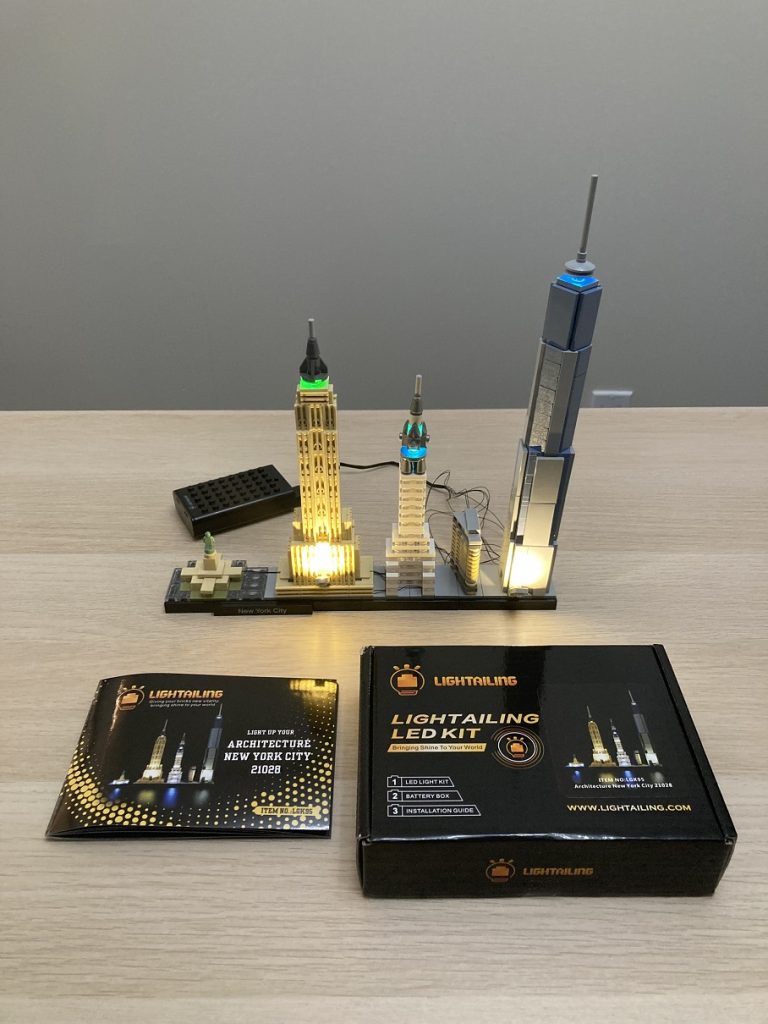 There are 2 different LEGO Lightailing LED Lighting Kits for Architecture 21028 New York City Skyline. You can buy them at Lightailing.com. The one that we are reviewing cost $25.99 USD / $33 CAD / £20 GBP / $37 AUD. Lightailing ships to various countries including USA, Canada, UK, Europe and Australia. Free shipping on orders above $49.

LEGO Architecture 21028 New York City Skyline can be bought at the official LEGO Shop at Home (USA | Canada | UK | Australia) site. Though, it is currently temporarily out of stock in the USA & Canada regions. Free shipping on orders above $35 USD / $35 CAD / £50 GBP / $149 AUD at LEGO Shop at Home. 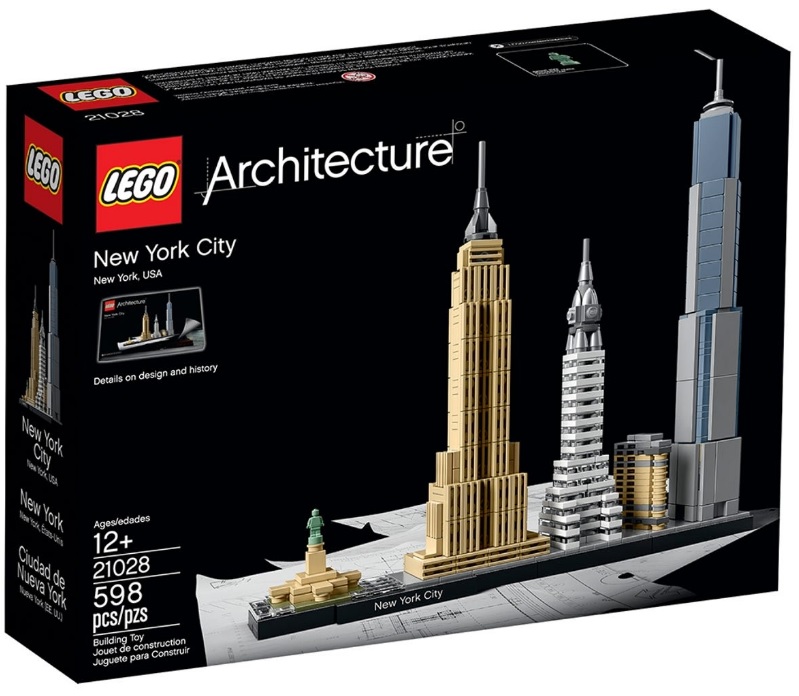