A year ago, when we first got a glimpse of the first-ever image of a set based on the forthcoming “The LEGO Movie”, the collective AFOL community stood with jaws unhinged, thinking “What in the heck could this movie possibly be about???” and also “That set looks awesome!!!”

Well, in the intervening months, The LEGO Movie may have come and gone from theaters and then been released on DVD, but the related tie-in LEGO sets are still readily available on store shelves as well as on LEGO [email protected] One of the sets we’ve yet to review is actually the one that accompanied the initial press release, what we came to know as 70808 “Super Cycle Chase”. It really was a perfect introduction to the movie, featuring the two main characters in a crazy, obviously cobbled-together, enormous motorcycle and an over-sized, militarized police truck driven by robots! 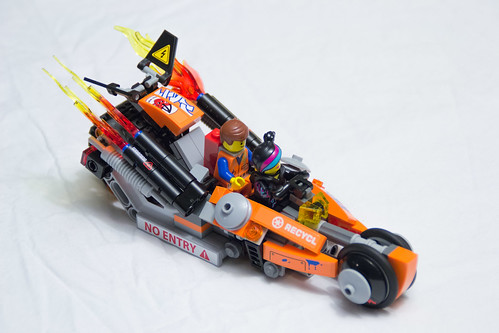 Read more in the LEGO Reviews forum and let us know what you think!