We mentioned it earlier that it was approaching 10 000 supporters and now its a reality for the Toronto Rocket Subway Train – Minifigure scale Electric Train. Congrats to Canadian Legovader217. Your project would now be headed to the LEGO Reviews stage where it would be evaluated to potentially become the next official LEGO Ideas product. For more details and images, you can check out LEGO Ideas.

TTC’s Toronto Rocket Subway Train
Minifigure scale replica of Toronto’s premier electric train.
A Canadian born TTC operator designs a Canadian LEGO set, based on a Canadian made subway train operating on North America’s third-largest transit system, in Canada’s largest city.
I hope the review panel at LEGO Ideas will understand this set does not only appeal to only the Toronto LEGO fans but to all Train and LEGO enthusiasts around the world will enjoy this unique and new realistic adaptation of the LEGO train design.
= 1805 Total Pieces
MAIN FEATURES
ALSO INCLUDED:
The “Why and How”
When I first started working on the subway I was amazed by the number of people that posed for “selfies” with the train, train enthusiasts taking pictures, and watching children on the platforms and overpasses wave to me as I drive the train. Seeing this attention from the public for the first time I came to understand how much of icon the TTC and this Canadian made train is for Toronto.
I originally began to design this set as a display model for myself as an adult collector. When I talked about my concept with my friends at work, many asked if I could also make additional copies of the set when I was finished. So with that in mind, the project quickly evolved from a simple display model into a fully functioning playset with all the detail I could think of.  I also visited my local LEGO store at Yorkdale Mall to browse LEGO City sets and train sets on display. When I showed my initial designs for the Toronto Rocket to the staff and customers currently in the store the response was overwhelmingly positive. The amazing staff there informed me how many local and visiting LEGO fans come in all the time looking for sets that are “Toronto” themed and they thought the Toronto Rocket set would be a huge hit.
I began to see that the popularity of a LEGO set such as the Toronto Rocket reaches much farther than just to the local Toronto population. There are train enthusiasts around the world who love to collect memorabilia such as this and I believe that with the TTC just being awarded the 2017 APTA Transit System of the Year is just one more reason this is the perfect time for this set to be released to the whole LEGO fan base.
Upon showing my completed set design for the Toronto Rocket set to the management at the TTC, I received a full endorsement to submit my Toronto Rocket Set Design to LEGO Ideas, with a promise to help spread the word about the voting via social media to the TTC employees and hundreds of thousands of daily TTC customers.
Why “Me”
This is my first attempt at a custom-designed LEGO set. I have been a collector of Lego for my whole life. I currently have over 450 Sets (mostly Star Wars and Classic Space) and 1500+ Minifigs consisting of over 25,000 pieces. So naturally, I decided to buy a LEGO CITY Subway set to add to my collection and I was saddened to realize there is no such set. The closest set I was able to find was the 60051 Passenger Train set.  It was then when I started to research the idea of creating my own set and in Feb 2018 I began this long process. The current train design I have on display here is as close to possible to the real train as I could get with the pieces available in the Lego Digital Designer Software.
More Set Information
This is the 3rd (& hopefully final) complete redesign. I have built all 3 designs and I currently have 2 fully operational Trains proving that the design is stable and functional. I have many videos of my trains on my Youtube Channel and the updates page.
While the original Toronto Rocket subway train has four sets of doors on each side on each car, this is not feasible on a model of this scale so I included only two sets of doors per side on each car. 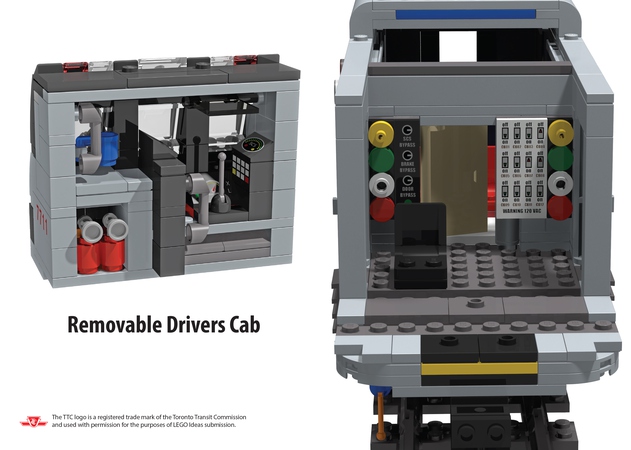