The latest LEGO Ideas Project Creation to reach 10 000 supporters is LEGO Caribbean Clipper Ship by Babyteeth. Congrats! Your project would now be headed to the LEGO Reviews stage where it would be evaluated to potentially become the next official LEGO Ideas set.

Hello. I am a creator with the nickname called “Baby Teeth.” The title of my second creation is [New Caribbean Clipper]. This creation is the renewal of the “Caribbean Clipper” which is the Lego 6274 released in 1989. Its use is to sweep the pirates as the patrol boats of the government forces. The number of bricks used is a bit more than 2,000 pieces. The main colors of the hull are yellow, blue and reddish brown. It is measuring the length of 57 cm, the height of 53 cm, and the width of 22cm.

It has total 22 cannons arranged which are not made of Lego’s ready-made parts but of the assembled basic bricks by myself. In addition, the hull of the ship is made of only the basic slope bricks by my own creation, too. This way could make the hull a little bit less gorgeous in its curve but I believe that it is closer to the mind of Lego that cherishes the expression of assembling small pieces with own hands. I also made the sail on my own by cutting the paper and then painting it with pastels to express it more voluminous and then drawing the blue stripes which are the same as the original piece. This creation is planned to be dividable which can be separated into 4 parts of the hull, the deck, the captain’s cabin and the bridge. 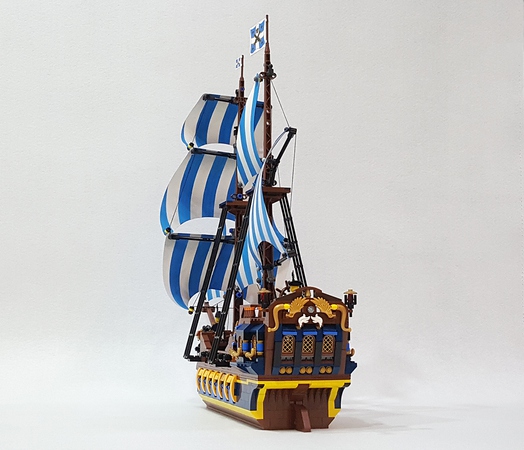