The latest LEGO Ideas Project Creation to achieve 10 000 supporters is LEGO Ideas Temple of Hermit by Brickfornia. Congrats! This LEGO Project Creation would now be headed to the LEGO Reviews stage where it would be evaluated to potentially become the next official LEGO Ideas set.

Story of “Temple of Hermit”

Once upon a time, There was one samurai who was old and never wanna die. One day he resigned as a samurai and decided to turn hermit to get a immortal life. He went to the sacred temple from ancient times. There were young woman master and her disciple who was orphan. To be a hermit, he needed to let go all of his property and abstain from drinking, however he could not do that. Instead he hid them all around of the temple…

Description of “Temple of Hermit”

The real japanese five-storied pagoda has five stories inside and outside and has its meaning of each floors, Earth, Fire, Water, Wind, Sky, from the 1st floor.

This ‘Temple of Hermit’ has two buildings, pagoda and master’s room. I made this pagoda three-storied from exterior, five-storied from interior because of the size and balance, it is different from the real Japanese five-storied pagoda. And I filled the interior with the details according to the each floor’s meaning,

In the master’s room, there is a big space with the master and a cat drinking milk and hidden sake(Japanese rice wine) by samurai in the upper. In the loft, we can see another cat aiming at a mouse by opening the roof. While the out side, there is O-mikuji(Japanese fortune paper) which is drawn by disciple and flowerpot near the river. Not only this but there are more details in this temple such as the pig that spilled miso(Japanese cuisine)chasing by samurai near the sakura tree, hidden money hung from the sakura tree and shōji(Japanese paper window) broken by disciple in the master’s room, so please check! 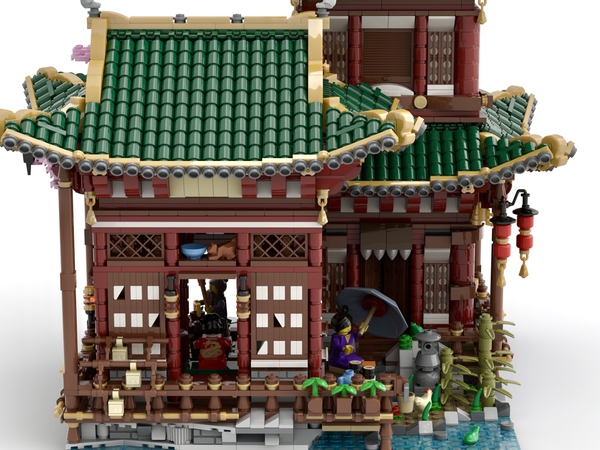